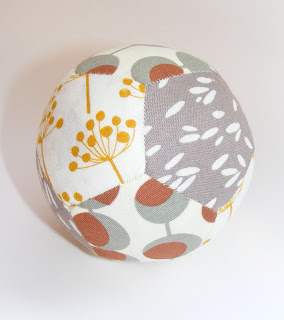 The cat has been looking decidedly bored lately and has taken to scratching everything she can get her claws into in an effort to relieve the tedium of her life. As I type, she is happily tearing to shreds one of the much loved carpets my husband and I lugged back from Morocco several years ago (well, he lugged, I directed).

To be fair, most of her toys are past their sell by date, and, she could do with some new ones. So the other day, I decided to take a break from my Star quilt (I'm itching to show you this, but it needs a little more attention then a post all of its own) and make Willow a patchwork ball.

It's achieved using an English paper piecing technique, which is perfect if you want neatly set in corners. It's also fabulous to do on the go, or when you just fancy a bit of relaxing hand sewing. To make a similar ball, you'll need 12 identical paper pentagons covered in various scraps of fabric. Make these in to 2 flowers, with one pentagon at the centre of each and five others surrounding it. Then turn your flowers into two little baskets by sewing the sides of the outer petals together. Finally, slot the baskets together to form the ball. You need to sew the baskets together with the right sides facing, which can get a little fiddly but don't forget to turn the almost sewn ball outside in before you finish sewing. Also, remember to leave a big enough gap to fit the stuffing into the ball's hollow space!

I stuffed mine with a catnip ball and left over yarn, but if you wanted to make one for a baby, you could always replace the catnip with a little bell. The fabrics I used to make Willow's ball are from Lotta Jansdotter's Echo range, which I purchased at Raystitch and a few other scraps left over from a curtain I made some years ago.

So far, Willow doesn't seem too impressed with her new toy. I think she prefers scratching other people's belongings.