Many years ago when it was possible for a single girl, on a less than average salary, to buy a small flat on her own, I bought my first ever home. It was a tiny basement flat, in a rather rough part of town, but it was all mine (and the bank's) so I decided to put my stamp on it.

It was the era of rag-rolling and other paint effects madness, so I duly colour washed, sponged and rag-rolled every possible wall. When there were no more walls left to vandalise, I set to work on the furniture, liming, distressing, staining and verdigrising every poor, unsuspecting piece of junk shop find I could get my hands on! Some of my efforts were more successful than others, many have since been consigned to the skip but one particular mirror is still with me some •¡÷÷ (oops, my keyboard has suddenly refused to do numbers!) years later, and has lasted the test of changing tastes. It also happens to be a damn useful mirror.

Another home and a search for a new mirror.
Recently, we've been looking for a mirror for our bedroom but haven't been able to find anything suitable. Then, just last week, I discovered a mirror that was the perfect shape and size. The only drawback was that it was cased in a heavy, Arts & Crafts dark oak frame, which really doesn't tie in with the rest of our furniture. Nevertheless, we bought the mirror in agreement that the bedroom doesn't have to be quite as light or linear as the rest of the flat, and, because it's silly to be slaves to one particular look.

But could I live with such a gloomy frame? Absolutely not! So out came the paint brushes and paint, and, a reprisal of my role of paint effects mistress (not quite so) extraordinaire. After much umming and ahhing I finally decided to go for a distressed look with touches of verdigris. Here's how I did it… 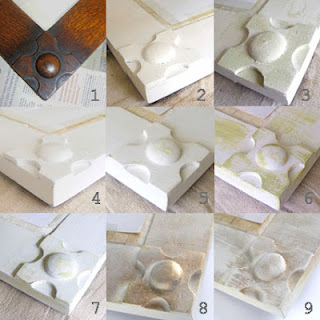 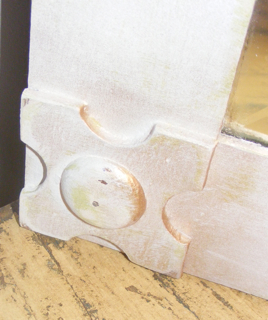 Tip: I've used pea greens, rather than the bluey-greens typically associated with verdigris, but you can use any colours you like: greys, purples, even pinks–perhaps something that tones with your existing decor–whatever tickles your fancy! 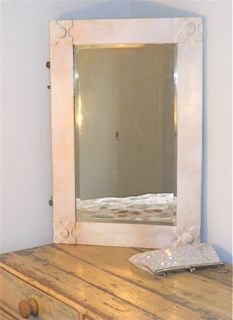 I'm happy with the result, but Patrick is worried by my newfound enthusiasm for upcycling. And so he should be–those vintage ercol chairs look as if they could do with a makeover to me!