After my last post, I feel a rather embarrassed to be writing this one. You see, little miss hoity-toity, high-mindedness here said she didn't like pictorial quilts, so why am I showing you this latest block? And more to the point, why did I have such a blast making it-it was the most sewing fun I've had in ages!

Again, this was an exercise set by my patchwork and quilting teacher. However, as I'm not making the whole quilt, of which, this appliqué would be just a tiny part, I came up with a simpler design, and, scaled down the size of the block, to save time that I can devote to other projects. (Mind you, I'm beginning to amass so many of these samples, that I think they may eventually become a project of some sort–we'll see). Perhaps it's because my appliqué was simple to make that I enjoyed the process of making it as much as I did. Whereas mine has only 6 pieces, some of my classmates chose more complicated designs, with anything up to 39 pieces. No wonder, I was one of the few people who actually enjoyed the task—I think I would have lost the will to live if I'd had to contend with that many appliqué pieces! 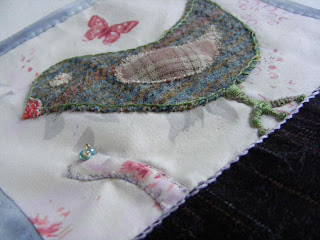 I used a combination of tweeds, Japanese woven cloths and some printed cottons to make my mini block. To push myself a little further (after all there's a fine line between simplicity and laziness) I trapunto'd the worm and stuffed the bird's wing (I considered sage and onion, but used quilt batting instead), then added a few basic embroidery stitches. Finally, because he looked a bit rude without them, I gave the worm some beady eyes! After my stained glass disaster, this piece of whimsy was an absolute delight to make, although, I probably didn't learn as much with this project. However, the next time I do any appliqué, I'll aim for a more professional, less primitive finish. 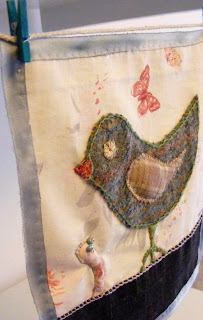 Whenever things go wrong, I find myself picking up needles to knit socks, which is exactly what I did after filing away my stained glass block. I tend to use the same patterns: this one from the purl bee (always minus the pompoms) and a selection from Wendy D. Johnson's Toe-up Socks for Everybody. I have a drawer full of socks I've knitted, my husband's sock drawer is expanding, as is my step-mother's: what does that say about the success rate of my other crafty endeavours?