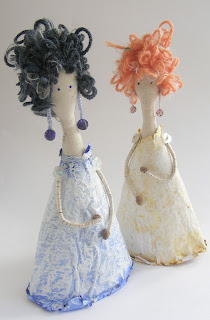 My papier-maché dolls have taken an unexpected turn. Initially, they were pale and interesting–the sort of young ladies, whom, you might imagine would be genteel, preferring to sit quietly reading poetry, rather than chase each other around fields. But these latest two are colourful characters with a fondness for flashy jewellery and a jolly good time. I've decided to call them Frizzy Lizzies due to their unruly hair (a burden I share). 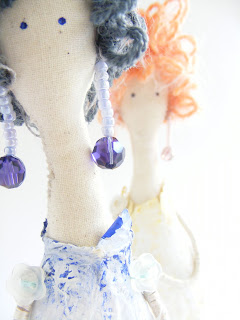 I didn't mean for the girls to have tangled knots for hair, I originally envisaged sleek up-dos, but I struggled to make them look right. Whenever I tried to gather the hair into a chignon, all I achieved was a mess, so in the end, I decided to go with the flow and make a virtue out of my failure. 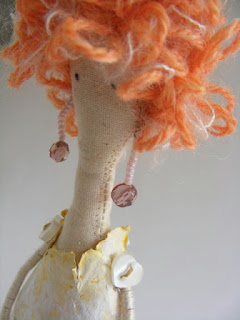 There are definitely more papier-maché dolls in the pipeline–they are such fun to make! Tidying up afterwards is another matter. Regardless of how careful I am, at least a handful of tissue paper usually manages to escape, although there is something quite pleasing about seeing what looks like confetti, scattered throughout my home.