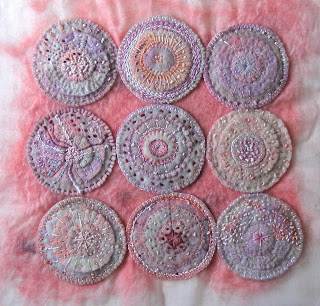 I have become so addicted to making penny mats, that I think I might have to join Felters Anonymous in order to wean me off my felty fixation. But it might be too great a wrench - making felt feels so therapeutic, and sewing into it is such stitching bliss, that one mat is never enough! Nevertheless, it's high time I got on with making something else, so this one is definitely (I promise) the last I'll be making…for a little while, at least.

In terms of materials used, my pink penny mat bears scant resemblance to its nineteenth century ancestors. It is not made from old hats, military blankets, or bits of worn suiting, although I did use a two penny piece as a template for the inner circle. Backing my penny mat with expensive silk organza (rather than burlap or canvas) that I've nuno felted, probably doesn't qualify it as a thrifty, make do and mend utilitarian object either! But I don't care, my penny mats aren't meant to be walked on, or thrashed mercilessly with carpet beaters, all I want is something pleasing and decorous to look at! 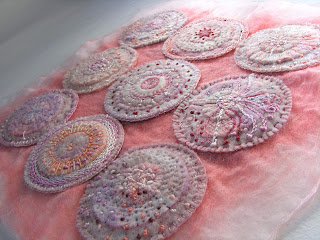 And if that makes me shallow, so be it!

PS: And I just couldn't resist making this one too! 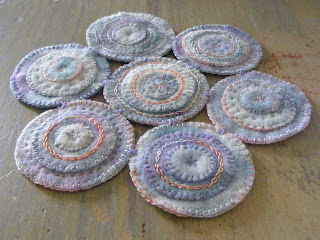 Posted by Elizabeth's quarters at 09:05