I'm not an avid dressmaker, but I do, occasionally make the odd item to wear, and this year, I've made more than usual. In the past, I've always opted for Vogue, Mc Calls, or Simplicity patterns as they were most familiar to me. But the blogosphere has introduced me to a number of exciting independent pattern designers that I'd never heard of before (Colette, Serendipity & Hot Patterns, to name just a few), which perhaps explains why my dressmaking mojo has accelerated of late. I will never be an expert seamstress, who thinks nothing of making full bust adjustments, shifting zips, or swinging darts this way and that, to a pattern that isn't quite right, but would be perfect with a few courturish tweaks. All I want from a pattern is that what I end up with will look like the image on the packet, that the instructions are clear and consistent, and hopefully fuss free. Basically, when dressmaking, I want to be spoon fed – I'll leave getting clever to other stitching pursuits.

Some of the independent pattern designers really do make their patterns idiot proof for lazy numpties like me, others expect more from their customers. So far, my absolute favourite pattern has to be the Bebe dress by Serendipity studio. Everything about it was perfect: a standard size packet, good illustrations, brilliant instructions, and a tissue paper pattern. Okay, I may not want to make dresses from quilting cottons, but no-one is forcing me to, it was merely a suggestion. (I did read a comment from one customer though, who said that quilting cottons are great to wear in the dry Arizona heat).

I've been less thrilled with other patterns, so here's a run down of some pros and cons of the (admittedly) limited range I've tried so far.

Vogue patterns: well you can't go wrong with these, and, like McCalls, Butterick or Simplicity, the range is vast, they are widely available and easy to use. This one is my favourite, but I definitely prefer the trousers to the skirt!

Burda Style patterns: on the plus side, they are cheap as chips, with great instructions, there is also a huge selection to choose from, plus the gallery/forum/blog really makes you feel as if you're part of a sewing community. The downside is that the pattern is supplied as a pdf, which you need to print out, then assemble, while not forgetting to add seam allowances. That's fine if you have a printer, and preferably lightbox too, plenty of time and sellotape. Above is my favourite pattern, although I added a plain band of fabric, rather than lace, to the hem. 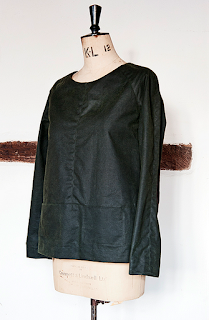 Merchant & Mills: I love their understated designs (and everything else they sell) but I'm not sold on the patterns coming as 'tailor's blocks', it just feels like a gimmick. The patterns are expensive, my fisherman's smock, was £20, but I guess the reasoning behind the cardboard block is that it will last longer than a tissue pattern. However, if you're using a slubby fabric (all of their garments are shown on flat fabrics such as linen) it is hard to draw round the blocks, which can lead to inaccuracies, and the best way to get round them, is to make a tissue paper pattern using the blocks as a template! You can just about get away with not doing that on a basic pattern, but on one of their more tailored pieces, you'd want to be exact. I've made the above smock a couple of times now, and each time, there's been way too much neck interfacing, and I've ended up lopping off the excess. It's a small quibble–but at £20 a pattern, it niggles! 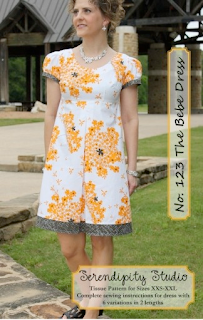 Serendipity Studio: I've only made the Bebe dress, but I lurve it, and will definitely make another. The patterns are so user friendly, and they direct you to online tutorials, just in case you need extra hand holding.

Hot Patterns: these are what prompted this post. I want at least a dozen of them, they look oh so very Annie Hall, and I love this slouchy skirt, which is going to be my next make. Sadly, I was disappointed when I received the pattern. For a start, the packet is too big for some letterboxes–who thought that was a good idea? It is printed on enormous sheets of printer weight paper and the instructions are not on a separate sheet – although they do look easy to follow. Most annoyingly, is the inconsistent placement of sizes (it's a multi-size pattern), sometimes they are above a cutting line, sometimes they are beneath it. In one instance, I found my size under the cutting line (closer to where the size below sits) at one end of the line, and above the line (in its correct position) at the other end of the cutting line. Luckily I double checked before cutting, or I could have ended up with pattern pieces of varying sizes!

I realise companies such as Vogue et al can afford to pay more for professional pattern checkers and testers, and that independent pattern designers want to set themselves apart by offering something different – a fresh take on an old formula. But there is a danger in trying to be too clever by half, and, overlooking the basics.

Making my own clothes feels good: I'm not just mindlessly buying stuff I don't really need, and cheap labour (well, if you exclude mine) isn't been exploited. I'd like to make more, but it's easy to be put off when a pattern doesn't live up to expectations, or is misleading. So I'd love to know if you've encountered similar problems when dressmaking (and I'm talking intermediate sewers here, not borderline professionals), especially if you've made any of the Sewaholic or Collette patterns, as there are a couple I'd quite like to try my hand at.

Have a great weekend!

Email ThisBlogThis!Share to TwitterShare to FacebookShare to Pinterest
Labels: dressmaking, Textiles and yarns