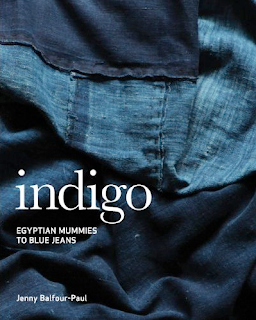 I've long admired indigo textiles, but it wasn't until I did a course on indigo dyeing that I truly fell in love with them. The whole process–from preparing the vats, wrapping and twisting fabrics, submerging them in dye, waiting, waiting some more, removing the fabric bundles from the vats, then watching any remaining patches of green turn to deepest blue–felt more like alchemy than textiles.

Keen to find out more about indigo and its history, I bought a copy of  Indigo: Egyptian Mummies to Blue Jeans. It is a truly fascinating read, although not a light one, neither is it a 'how to' manual, or a lavish coffee table book. Instead it is a thoroughly researched examination of indigo's cultural, symbolic and economic importance, as well as its environmental implications. If this sounds a little overwhelming, don't be put off, the book is far from dry and heavy-going due to Jenny Balfour-Paul's enthusiasm for her subject. Indigo also contains some wonderful photographs, my favourite being one of Yemen women wearing 'black indigo' dresses, and the most extraordinary hats!

The book explains how, due to wars and colonial expansion, indigo became a hugely important commodity that eventually replaced woad in Europe as the blue dye of choice. I found this particularly thought provoking: having lamely associated indigo textiles mainly with Africa, Asia and the Far East, I looked with fresh eyes at my faded blue jeans and the British Bobby's uniform. In fact, the more you consider indigo–be it in textiles, painting, or even medicine–you realise just how ubiquitous it is, which is perhaps why it's so easy to overlook and take for granted.

The down and dirty nature of indigo dyeing is also covered, including how urine and dog's feces were often (and are occasionally still) used to enhance the dye solution–thankfully this was not considered necessary on my course! Techniques such as batik, shibori and ikat dyeing are well explained, and plenty of beautiful examples shown. However, for me it is the symbolic aspect of indigo, and many of the examples given, that I found totally compelling. Whether it's worn as a sign of fertility (such as Dogon women who wear resist patterned wraps after marriage, then cease to wear them in old age when they are no longer fertile), or as a sign of subservience and equality (Mao suits), or to suggest supernatural power, indigo dyed cloth is more than something to merely cover the body.

Whether woad, indigo, or even purple shellfish, the importance of the blues extracted from them reach far beyond their usefulness as dyes. Sumptuary laws might denote the social status of a wearer of blue or indigo (be it a royal blue silk kimono, or a peasant's scraps of indigo dyed hemp clothing). Blue is associated with divinity, think of Krishna, or the blue robes of the Virgin Mary. In language the word blue is equally potent and may suggest depression, coarse and vulgar humour, and even voices of the oppressed, as in the blues. Subliminally, blue may also bring to mind images of death in myths and fairy tales, such as Bluebeard's castle.

The author ties all of this (and so much more) together in a remarkable book, that ends by championing indigo as an agricultural crop with a potentially positive effect on the environment–although I suspect, she may be a little biased on that point. I can see why though–it's easy to develop a weakness for blue (as an ardent Chelsea supporter, my husband would definitely second that).

If you too are a fan of blue, I can't recommend this book highly enough–you'll never look at a pair of jeans the same way again!

Posted by Elizabeth's quarters at 09:10