I'm one of those knitters who always has something on the go so over the years I've got through a fair amount of yarn. I tend to favour plain makes in greys and neutral colours which is why I don't often show them here as they aren't the most exciting things to look at, or talk about. While my colour palette might border on the utilitarian, I do love to feel a bit of luxury and am almost magnetically drawn to any yarn containing silk, mohair, alpaca, angora or cashmere–even if they do make me sneeze when I knit with them. (Storing yarn in the fridge makes it less flyaway but as my colour choices often include blues, greys and greens, I worry they might get mistaken for a case of bad mould should guests open the door). 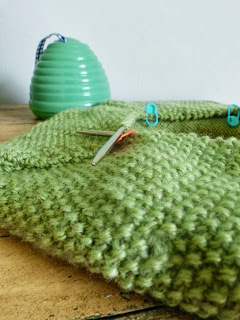 This tam, which I started to knit over Christmas, is made using wool from Blue Faced Leicester sheep (available from Debbie Bliss). It's beautiful to the touch despite not being a 'luxury' yarn, best of all, it is ethically produced in the UK from sheep that live a good life. To be honest, I'd never really considered where my yarn came from before, and if any animals suffered during it's production. I think I just blithely assumed that handmade automatically trumped mass-produced, and that the more you pay for something, the better the conditions must have been for all those involved in its production (including the animals).

But I recently read an article about shop bought clothes which made me think. I was shocked to read how angora is generally cruelly stripped from rabbits (not lovingly combed as I'd always imagined). This in turn made me think about silk, which is often the result of roasting or boiling to death the moth caterpillar in its cocoon. Some lucky critters are allowed to live, but only for the purpose of breeding, after which, they are left to starve to death.

It's easy to jump to the conclusion that these methods are only used in the production of cheap, mass-produced textiles, but that is simply not the case. Inevitably, where demand is high there will always be short cuts when it comes to supplying the consumer, besides, who wants to pay full price when they can get something just as good on the cheap? Unfortunately, it takes events such as the collapse of the Rana Plaza factory in Bangladesh, for many to consider the real cost of what we wear and what is and what isn't acceptable. Naturally, the welfare of human workers should be of paramount importance, but since much of the textile industry relies on animal products, shouldn't their welfare be considered too?

Thankfully, there seems to be a growing awareness and unease about cruelty to animals within the yarn for craft industry. As of December 2013 Rowan stopped producing angora and is looking at alternatives–good for them! And there are options for silk lovers, such as choosing wild silk, where moths live lives free from human interference, and producers simply gather the empty cocoons (this is known as Fair trade Ahmisa silk–or peace silk). Companies such as Artesano recognise the symbiotic relationship between humans and animals. Their policy is to stock yarns produced by manufacturers who pay their employees a decent wage, while the yarns come from smaller flocks of well kept sheep.

Admittedly, trying to be completely ethical about what I wear, and the materials I buy to make into things to wear, can become an absolute minefield of decisions. I'm certainly no hemp-wearing hippy (apologies to any hemp-wearing hippies that might be reading). I'm a meat eater, wear leather shoes and own several leather handbags (I would never, ever, wear fur though–even when 'excused' as vintage, it's still fur!). But I can try to be a little more mindful of what I buy, perhaps look for alternatives to leather, choose ethically produced yarns and buy more secondhand fabric than new. It's not a huge new year's resolution, but it's not a bad one either.

PS: Is it too late to wish you all a happy new year? I hope you all thoroughly over-indulged over Christmas, personally, I'm now one part woman, 99 parts mince pie!
Posted by Elizabeth's quarters at 06:13

Email ThisBlogThis!Share to TwitterShare to FacebookShare to Pinterest
Labels: knitting