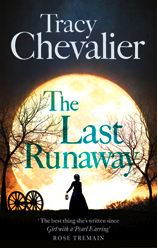 Fancy a bit of light reading, with a sprinkling of history, quilting and forbidden desire? Then this could well be the book for you! It was first recommended to me for its quilting subject matter, but I finally decided to read The Last Runaway, because the jacket claimed it also dealt with opposing attitudes to runaway slaves, and, how Honor Bright (the Quaker heroine) becomes involved in helping runaways escape to Canada. I thought I'd be in for a thought provoking read, perhaps one that taught me something of the people involved in the underground railroad, and which might explain something of the motivations of those opposed to it.

Now, I realise Tracey Chevalier is known for writing entertaining historical fiction rather than weighty academic tomes, but it came as a surprise to learn she's a dab hand at Mills & Boon style prose too! At times, this was nearly laugh out loud funny (and it shouldn't be). The book is laden with clichés and cardboard characters. First there's Honor Bright, the 20 year old sheltered Quaker girl fresh off the boat from England, who although she's done little more than hold hands with a man, is soon romping in a corn field with a Quaker farmer. She quickly marries him but her thoughts (and desires) keep returning to the devilishly handsome and ruthless slave catcher, Donovan Mills, in whom she detects an 'inner light'. This brutal man is somehow, always on hand to leap off his horse, scoop Honor into his lap and carry her to her sick bed, or provide a manly chest for Honor to sob into when she needs it. And, if she were only to say the word he would change his evil ways and become a decent, hard working railroad man. For, you see, ever since their first meeting when he refused to return the key to her trunk, he has worn it close to his heart–talk about laying the symbolism on with a trowel!

The other women in the book, are basically either salt of the earth types, such as Belle Mills (Donovan's sister) and Mrs Reed (a former slave) both of whom help fugitive slaves reach their destination, or sour and jealous Quaker women such as Abigail, and Judith Haymaker. Only Dorcas Haymaker seems to develop in character and offer some insight into her family's reluctance to help runaway slaves.

Ah yes, the slaves…well they do pop up now and again. They are usually nameless, and rarely give an opinion on their predicament, while the depth of the desperation that forced them to risk death, by starvation, hanging, or the bullet because the circumstances of slavery were so utterly intolerable is hardly alluded to.

I was left with the impression that the author had set herself a challenge which she failed to meet. The intention for The Last Runaway must surely have been to offer a thorough and well researched look at the situation of runaway slaves, and the efforts of those helping them escape (the acknowledgements suggest so), as well as the conflicting emotions, prejudices and fears of the communities in which they lived. Yet I couldn't help feel that the runaway slaves served as little more than a plot device for bringing Honor Bright into contact with Donovan and Belle Mills, which is a shame as it does the subject a great disservice.

Still, if you're looking for an stonkingly good holiday read, this is definitely worth a punt (especially if you like patchwork) –just don't expect too much!