I'm not one for anti-macassars, or lavender sachets, but do love a bit of lace. Or more specifically lace patterns and the shadows they cast. I like the mind-bending way it seems you have to think when making lace. You have to consider the holes, or what you're not stitching as much as the stitches themselves, which appeals to my love of negative space! 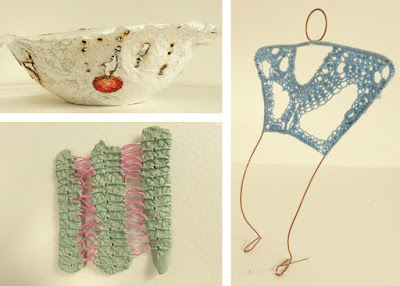 For ages, I've wanted to delve into the world of lace but have been put off by what is often done with it. I really didn't fancy spending hours/days/weeks… making a crude imitation of something that might look decent on a handkerchief, if done properly, but realistically would end up filed under 'poor first attempt' in my sample book. Besides, who wants to make something for someone to blow their nose on? I'm not ashamed to say, sometimes, I need more instant gratification than traditional lace making methods can provide. I'd also like to produce something a bit unexpected.

So I've been playing around with the idea of lace by combining it with other media such as, papier maché, clay and copper wire in an effort to produce something bolder and more three-dimentional than usually associated with lace. Pressing lace into clay might seem like cheating, as might using ready made paper lace doilies, but doing so gives me a head start. I can then add stitching to what I make, be it fagotting stitch to clay strips, rough needle lace to wire figures, or the holes burnt into a papier maché bowl with a soldering iron. That last one was particularly good fun, nothing beats a bit of controlled destruction!

Next up? Another attempt at a wire figure, this time with a more considered outfit.