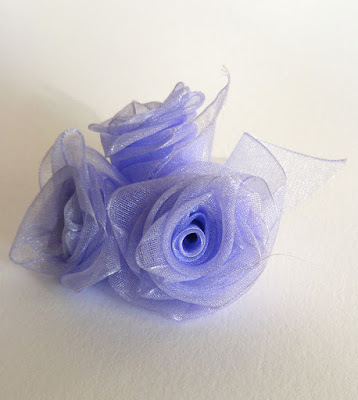 If you're bored of making Dorset buttons, although I don't see how that could ever be possible, here's something else you might like to try. If you didn't manage to get to a haberdashery before lockdown use strips of fabric instead of ribbon. The frayed edges of torn and worn fabrics will add a charming shabby-chic look to your rose. 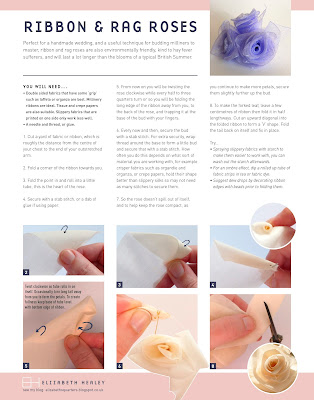 When not eating, making or reading, Patrick and I have been making the most of our daily allowance of outside exercise.* Now, I've never been sporty and have terrible hand eye co-ordination. I lack competitive spirit and if someone is eager to run faster than me so they can catch a ball, or be first to cross a finishing line, I'm happy for them to do so.

At school, I was hopeless at tennis, netball, rounders and lacrosse. There was a brief period when I was vaguely decent at throwing things (javelin, shot put and discus). However, as a young teenager back in the seventies, beefy female shot putters weren't the role models I aspired to become (I wanted to be Farah Fawcett-Majors) so I gave up throwing things as soon as I could.

Lockdown makes us behave strangely though. There are so many more joggers around now. People who look as if they've never jogged in their lives are suddenly taking up the activity with gusto.

Likewise, encouraged by Patrick, I've been running around a field trying to throw and catch a ball (actually a rolled up shopping bag). We've set up a Swingball in the garden, and in my eagerness to hit the ball, I've sliced the heads of most of the giant alliums. I'm covered in cuts and bruises from landing on the ground as I overstretch and fail to reach the ball, when playing catch. Because I don't own sensible sportswear, my clothes are covered in grass stains. And I find that sport gives me a headache (falling sends shockwaves to my brain).

At my age, I really should know better although I have to admit, running about can be good fun. I'm now trying to beat my personal best of catching a ball four times in a row. Woohoo: Ian Botham watch out!

Have you tried anything new during lockdown?

*Since originally writing this (I'm always slow to post!) the instruction has changed. Rather than stay home, we are encouraged to go out but told to be alert which reminds me of the old joke 'Be alert: your country needs lerts'.


Posted by Elizabeth's quarters at 03:32