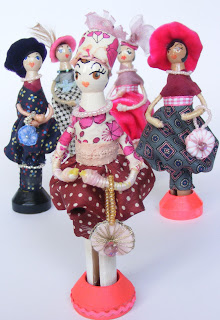 When I was a child, I used to love making peg dolls, and now that I'm fully grown, I still do. Peg dolls combine some of my favourite activities: painting, sewing, beading and playing with fabric, and best of all, they don't take long to make! I've recently been inspired to make another batch after watching re-runs of The House of Elliot, (a period drama about two sisters and their couture clothing house). I drooled over the lavish costumes, all silks, velvets, beads and feathers–perfectly capturing the opulence of 1920s fashion and decided that while I would look quite mad swanning around London dressed thus, my little ladies could certainly get away with it. So, whenever the immensity of my quilt-as-you-go Star Quilt got the better of me (more of which later) and I craved an instant (some might say shallow) hit of crafting satisfaction, I'd make myself a peg doll. 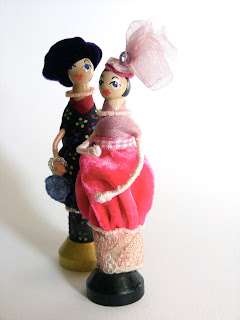 This group isn't quite as flapper girl as I'd originally intended. I found the straight up and down dresses made the ladies look too tubular, so instead created Edwardian style hobble skirts for my dolls, to give them more shape. I like to think that while I'm busily patchworking or quilting my ladies are lunching somewhere fabulous like the Ritz, or the Savoy–oh to be a lady of leisure!

As for the quilt-as-you-go Star Quilt, this is a college project that I've almost completed. Comprised of six sections, each consisting of various star blocks, eg, compass (see photo below), La fayette and Martha Washington's Star, I feel as if I've been working on it for ever, even though it's only been seven months. However, this week, I finished patchworking the final section and assembled the first four quilted sections, so I see light at the end of the tunnel and hope to show you the finished quilt soon. 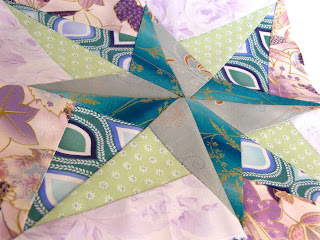 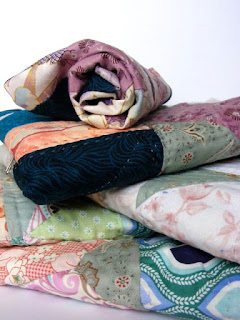 After that, I'd like to make a start on a quilt of my own design, perhaps something simpler, based on a Chinese Coins pattern and suggestive of the sea side. But first, I'll make some more peg dolls–I think they are becoming a displacement activity!