The Art of Manipulating Fabric 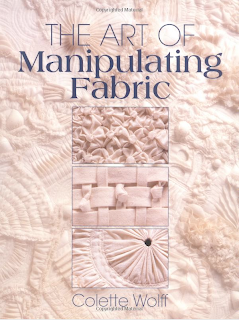 Anyone who loves fabric and playing with it, be it pleating, smocking, shirring, cording, stuffing, or gathering it into anything from Suffolk Puffs (yo-yos if you're American) to flambouyant ruffles should put Colette Wolff's The Art of Manipulating Fabric at the top of their reading list. An absolute classic, photographed entirely in black and white, illustrated with basic line illustrations, and showing swatches rather than finished pieces, The Art of Manipulating Fabric is nevertheless utterly peerless for the breadth of knowledge and inspiration it contains. I don't think I've ever seen a book that offers as much to everyone from quilters to dressmakers to accessories designers: you could say, I rate this book very highly indeed!

Now that I've almost finished my Star Quilt I'm beginning to think about my next big project. Encouraged by my husband, who loves the seaside as much as I do, I'd like to base my next quilt on a strip of the Kent coast that we both love, and use some of Colette Wolff's techniques to achieve my aims. If you live somewhere exotic, perhaps near the equator even, I imagine that mention of the seaside probably suggests a sunny, golden, joyous place, and hence a quilt based on this would be a riot of colour. But you'd be wrong. I'm from England and it always rains here so the sky is usually grey and foreboding (although, as I write, a strange yellow ball is making a rare appearance in the sky). Besides, the seaside I'm thinking of isn't even the seaside proper, but a stretch of estuary mouth called the  Swale, which eventually becomes the river Thames. Call me perverse but nothing makes me happier than trudging for miles in the wind and rain across stones, shingle and mud flats and scrambling over groins to see what the tide and walkers have left behind. 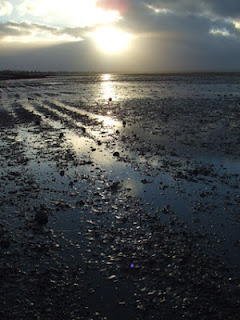 It can be a bleak landscape: endless groins (there to prevent the beach being swept away by the tide) and a concrete sea wall (there to prevent flooding) and that's about it, no yachts or fun fairs or ice-cream sellers–maybe the occasional fisherman. The only embellishments on the horizon are windfarms: love them, or loathe them, it's hard to deny the mesmeric power of these graceful, waving giants at sea. It's such a utilitarian landscape, completely lacking in frivolity, and yet, to me at least, the Swale is one of the most beautiful places on Earth.

So my next quilt will be in tranquil tones of grey, sand and stone, which I think suits a quilt intended for a bedroom, and hopefully, what it lacks in colour will be made up for in texture and pattern. Since I want it to have the repetitve, sectional feel of the Swale I'll use a simple Chinese Coins design. I'll machine quilt the plain linen sections that fall between the coins, and try to include some of Wolff's techniques here. The colourful strips could suggest what has been washed up on the shore, and I'd like to add in as much texture as possible here.

I think I may need to do a few test swatches first, but this is my plan, let's see how it progresses.

Posted by Elizabeth's quarters at 09:59