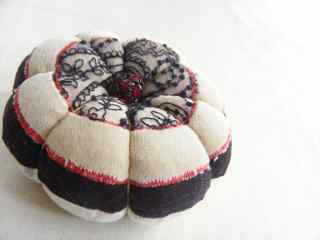 Lately, I haven't had time to do as much quilting and crafting as I'd like. Paradoxically, all the books I've been designing lately, have been about quilting and crafting which leaves me feeling a certain empathy towards the plight of an alcoholic whose favourite tipple is tantalisingly close, but just out of reach.

I'm not complaining about being busy: far from it, I have to earn a living, and there are worse ways of doing so. In fact, it's rather nice to see what other people make, pick up some tips and generally add to the list of things I want to try my hand at making. Inevitably, the list is getting longer by the day.

But during an unexpected lull in work last week, I managed to cram green tomato chutney making, cutting a few hundred 1" squares for a patchwork cushion and plenty of circles for pincushions into a single afternoon. I think, I may have had steam coming out of my ears at one point. So, perhaps it's true, that the busier you are, the more you manage to squeeze into your time?

All this prep meant that on Saturday, I was able to sit at my sewing machine virtually all day (apart from a brief interlude at the allotment to sort out some wind damage and gather even more green tomatoes—I haven't a clue what to do with them as there's only so much green tomato chutney we can eat). Now, some sewers are organised, and discriminating in their choice of music to listen to as they work, but I'm not. As long as there's no white noise, or snivelling violins*, I'm happy. So, apart from not being a fan of classical music, (I know, I'm a complete Philistine, but at least I'm honest), I'll listen to pretty much anything: jazz, reggae although at the moment, it happens to be Motown. 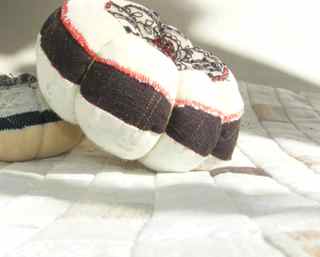 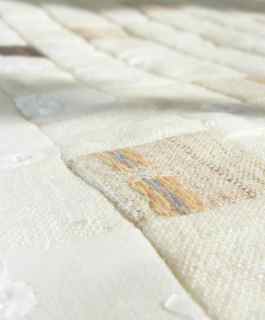 As is clear from their prolific output, the chaps at Motown were no slackers. I wouldn't swear to it, but it seems to me that Berry Gordy took the same approach to turning out hits that Chicago took to producing cars. Motown's industrious verve must have permeated through the airwaves on Saturday, since, by the time I switched off my machine, I'd produced several pincushions, a mini-quilt top for a cushion cover, and the first of one of the plain quilted sections of my Chinese Coins quilt. My eyes were burning, and I was all achey from being hunched over my machine, but it was a happy and satisfied kind of achiness. 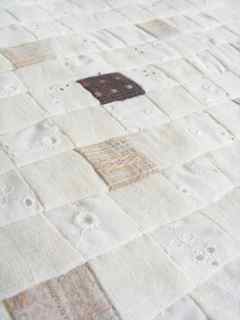 So, I'm now convinced that Motown is the ideal music to listen to while sewing, and subconsciously, I seem to be conflating the two; after all who can resist classics such as, Where did our love sew? by The Supremes, or Berninadette by The Four Quilt Tops, and my absolute favourite, I second that freemotion by Smokey Robinson and the Miracles?

* I can't claim this wonderful phrase as my own, it is from a touching poem by Philip Larkin called Broadcast. Larkin loved jazz but hated classical music, he only endured it because it brought him closer to the woman he loved. Well, that's at least two things I have in common with old misery guts Larkin: Patrick loves classical music, I much prefer jazz.
Posted by Elizabeth's quarters at 04:17