As a teenager living in North London, Ally Pally used to be  where we'd all slope off to for cigarettes, cider and snogging, not knitting needles and yarn-they were for grannies! Well I might not be a granny, but I seem to have gone straight from punk to young fogey, to older fogey and Alexandra Palace is now an annual shopping destination for fat quarters and luxury yarn. 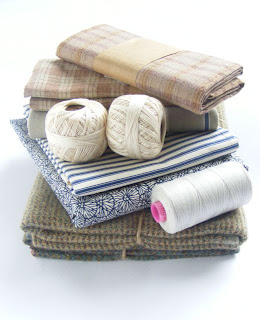 I picked up some lovely tweeds at Jamieson's of Shetland, plus some Japanese fabric, linens and warm, slubby fat quarters at Sew Enchanting, which surprisingly, aren't shown on their website. I have to confess that I am drawn to texture rather than colour and sometimes find stands that look like a blizzard of print a little confusing. I prefer the statement that simpler fabrics make. Don't get me wrong, I genuinely admire the skill it takes to combine a lavish use of print while retaining the impact of a patchwork block, but it is not something I feel comfortable doing. Besides, why gild a lily? But perhaps my real reason for developing this aesthetic is that stands selling Liberty prints, and pretty florals, always seem to be the most crowded. Being a bit of a shorty, I dislike crowds and find the inevitable wrestling match it takes to fight my way through bags, elbows and bodies towards a potentially interesting fat quarter too much effort. There's a lot to be said for internet shopping!

Although I enjoyed the show, I couldn't summon up quite the level of enthusiasm for it as I have in previous years. I suspect it's because the Festival of Quilts was so impressive, that this year's Knit and Stitch show was slightly underwhelming by comparison. It might also have been because Patrick couldn't conceal his boredom as he traipsed around behind me.

I would like to point out here, that I didn't force Patrick to come along, he volunteered—looked up train timetables and everything! I asked him if he was quite sure that he wanted to tag along, and his reply was an adamant 'yes, of course!'. Yet, almost as soon as we were inside, Patrick adopted a pained expression (akin to that of a chastised puppy) and proceeded to ask 'can we go yet' every couple of minutes. Eventually, we agreed that he should wait by the coffee and muffin stand, while I made a quick tour of the show. On my return, I have never seen such a perfect picture of bored blokedom in my life, I wish I had had the presence of mind to take a photo so I could share it with you. Later, I caught Patrick exchanging sympathetic glances with another equally bored looking bloke. Was I sympathetic to their predicament? Not a snowflake's: let's just call it payback for a Summer spent watching endless sport.

When we left, I asked Patrick what he had thought of the show. With a look reminiscent of a hostage finally set free after years of captivity, he muttered something about 'hoardes of wombles' then led the way down the hill towards the nearest pub. 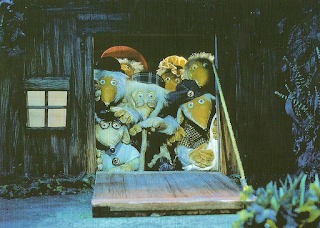 What a cruel indictment of my fellow crafters, but one that I fear may contain a grain of truth. Ouch!