My Chinese coins quilt is progressing slowly but steadily and I'm now hand quilting the third of the nine linen strips that lie between the textured strips. If I were to start from scratch, I'd take a more systematic approach to making this quilt. I'd be stricter with myself about making sure all the strips were the same width from the get-go and not having excesses of wadding and backing fabric spilling out at the sides of each strip. 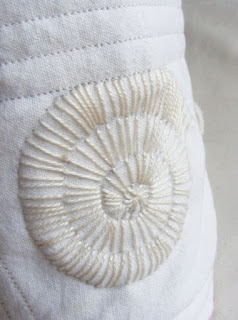 The real flaw in my method is that it results in a lot of wastage. Had I chosen less challenging fabrics, this might not have been the case, but the silk velvet used in the textured strips, while lovely, was a nightmare to work which has meant many of them wobble rather than run perfectly straight. So, I needed to assess what the maximum width could be for the least regular strip, trim it to size, then all the others to match. Ever the procrastinator, I was tempted to leave this task until I was ready to assemble the quilt until I realised it might mean losing some of the hand quilting I'm doing on the plain linen strips. 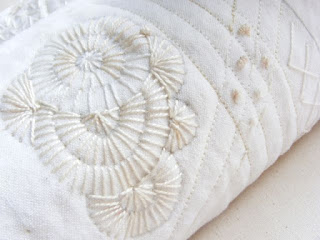 So the lady made a U-turn and I trimmed my linen strips to the width of the narrowest textured strip before I began to quilt. I'm so glad I did as they now handle better than before, are much neater and, it is easier to imagine how the finished quilt might look.

The quilting is a combination of machine and hand stitching. The machine stitching is mainly staggered groups of channels with random bits of zig zagging to anchor smaller folded or pleated areas. In the unmachined areas I'm using a number of utility stitches such as big running stitches, Mennonite tacks (my current favourite) and French knots, all of which I think should compliment the hand-tied element of the quilt quite well. To get that bleached out quality so often found at the seaside, I'm using variegated threads in tones of white, cream, stone and grey. The machine thread is from Hannah's Room, while the cotton perle is by Valdani, but for the life of me, I can't remember where I purchased it, which is infuriating as my stash is fast running out. I'm really enjoying the process of hand quilting these strips, there is something so soothing about just getting lost in the process of stitching and listening to the rhythm of the needle as it slips in and out of the linen. 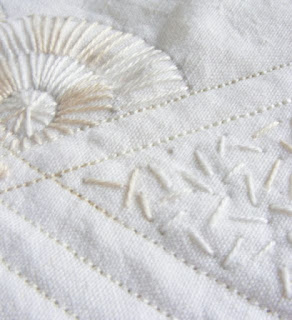 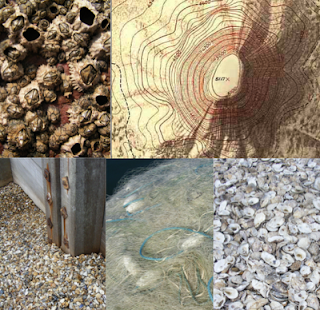 Before I even started this quilt, I knew I wanted it to be reminiscent of the Kentish coast, and as I've stitched all sorts of images have been passing through my mind such as barnacles, fish bones, shingle, old fishing nets and even topographical maps. I hope some of these things are reflected in the stitching, in a subliminal, rather than in an obvious kind of way. If, when it's finished we wake to find a seagull sitting on the edge of our bed, I'll know I went too far! 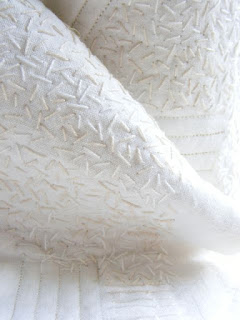 Posted by Elizabeth's quarters at 01:42

Email ThisBlogThis!Share to TwitterShare to FacebookShare to Pinterest
Labels: Quilting and stitching