At last, a block I'm happy with! It's called 'pineapple,' and, due to it being a symbol of welcome, hospitality and generosity has traditionally been used in quilts intended for guests' rooms since the seventeenth century. In days of old, sailors would stick the exotic fruit to front doors and railings to mark their return from long voyages, and, to invite friends and neighbours to call upon them and share their good fortune. Gradually, the pineapple, became an architectural feature that can still be found adorning lintels, railings and gate posts. However, in 1761, John Murray, the 4th Earl of Dunmore went absurdly overboard with his use of it when he commissioned this pavillion as a gift for his wife's birthday. I would love to have seen the look on her face when he presented her with such a generous, and unusual, gift! 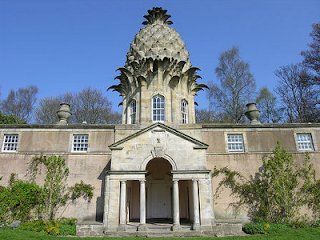 Partly, I like this block because of the wonderful fabric used to make it which is from the Alchemy range by Shell Rummel. But it is also the technique that appeals to me: foundation piecing, with pre-measured strips of fabric. This means you get the neat points typically associated with foundation piecing, but none of the irksome wastage. Another reason this block makes me happy, is that I have a preference for patterns that radiate out from the centre, such as Log cabin, Churn dash, and, most of the star patterns–there is something about their symmetry that is so very satisfying. 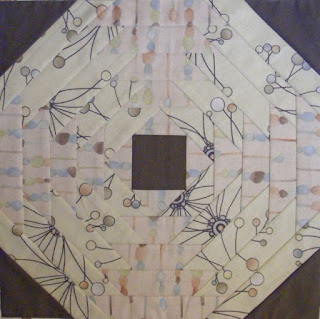 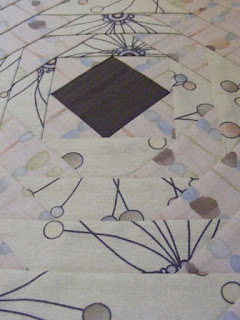 Funnily enough, I only recently realised this preference, when using the same fabrics to make a block based on Seminole patchwork. Again, I loved the technique–lots of strips that combine to make a zig zag type of pattern (although matching them up involved much muttered cursing) but I wasn't as pleased with the result. To me, the piece looks more like three borders, rather than a stand alone block. Although repeated several times in colours traditionally used by the Seminole Indians, such as blue and black, it could make a striking wall hanging. 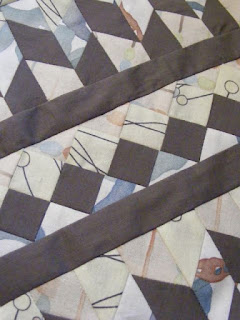 My own, more modest pineapple, is destined to become a humble cushion. And as we don't have a dedicated room for guests, I shall merely offer my cushion to them for extra comfort when they visit-although I might ply them with a pineapple cocktail or two, too.