As a child, I always envied the little girl along the road, whose parents lavished her with toys–most notably dolls. She had Tiny Tears, Teeny Tiny Tears, the entire range of Pippa dolls (and their accessories), Barbie dolls and Sindy dolls galore. My parents took a minimalist view when it came to gift giving, and my father, who published magazines on planes and scuba diving, saw fit to give me an action man, complete with wet suit, fins and aqua lung! This made me very popular with the boys but something of a misfit amongst girls, and somehow, no matter how much I tried, I could never get my action man to look comfortable in a tutu. 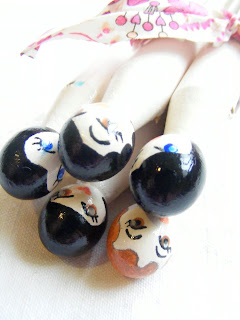 This perhaps explains why I love making toys, when I should have outgrown them shortly after the introduction of decimalisation. Recently, I've turned my attention from knitted rabbits to papier maché dolls. I was intending to make another group of peg dolls, based on my favourite detectives, but I'm waiting for Patrick to drill some armholes in the pegs before I begin (he likes to make a contribution and I hate power tools). So instead, I decided to make these… 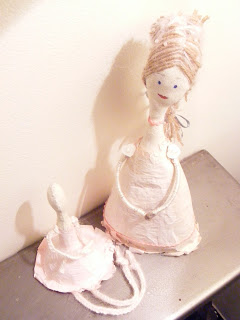 The finished one is called Charlotte, and I think the name suits her. For both girls I used tissue paper so the papier maché remained light and delicate, and funnels and bottles as moulds for the bodies. The head, shoulders and limbs are all made from textiles–calico, yarn, embroidery threads and pipe cleaners. I think I'll keep the embellishment to a minimum as I like Charlotte's ethereal and slightly washed out quality (although the photos help on that score). 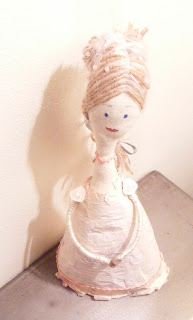 I can see that making these will become something of an obsession as I no longer look at bottles etc for their contents, but for their suitability as doll moulds. So the 'pegtectives' may have to go on the back burner until I have as many dolls as the little girl who lived on my road.


Posted by Elizabeth's quarters at 07:30