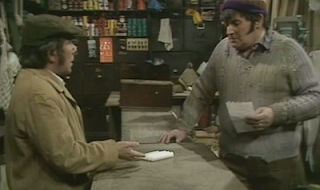 My husband's attitude to knitting shops has greatly improved. Indeed, last Saturday, he asked to tag along when I went shopping, and even showed an interest in some of the contents of my favourite knitting shop. I was impressed that instead or calling everything wool, he rather knowledgeably called it yarn. I should have known it wouldn't last.

As I waited my turn to pay, Patrick asked what the woman in front of me was holding. I replied that  the aquamarine hued hank of wool was called a skein–in fact, to be precise, she was holding four skeins. Cue much shrugging of shoulders that reminded me of Mike Yarwood doing his best impression of Ted Heath, as Patrick, and another hapless husband exchanged glances and school boy sniggers. 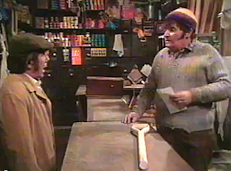 However, as readers might have realised, I'm a sucker for a good pun and a bit of wordplay, so have to admit, I was almost (but not quite) as amused as Patrick. (We were careful to stifle our mirth in case the woman in front, heard us, and took offense). Afterwards, we re-imagined the scenario as a sketch by the Two Ronnies, with yarn substituted for the four candles/fork handles, and the scene, a knitting shop, not a hardware store. Naturally, the fabulous Ronnies would have to be played by the nearly as fabulous French & Saunders in their comic heyday. 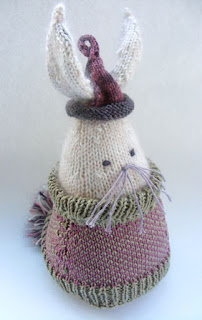 As for my purchases, I bought some Rowan sienna 4 ply to make a jumper for one of my Wabbitys. And in case anyone takes offense at the bawdy tone of this post, here's Hutch, in his new jumper, which I hope, will go some way to making amends.