But I prefer sleeping between crisp, cool sheets, and hate the feel of greasy sun cream on my skin. Instead, I wear a big hat and dress like I'm in purdha then find a shady spot to sit in while Patrick roasts in the sun. Croatia was beautiful though, with a glorious coastline, stunning sunsets and a mountainous backdrop. Reminders of recent troubles (and perhaps WW2) speckle the buildings, and evidence of gunshots & bombing are plenty. The snorkeling is good, and the lizards are pretty little green things who boldly skit across the table while you're eating! For the first time ever, I got a half decent pic of a hawkmoth with his probiscis unfurled ready to sip nectar (I'm fascinated by these creatures but have only ever managed very blurred snaps before).

I was told beforehand the Croatian Riviera is like the Mediterranean used to be, which sounded a slightly elitist statement to me. But if what that really means is tranquil, good food (and lovely wine!), not too hedonistic and overly dominated by clubbers or stag/hen parties, then I'll take the old fashioned Mediterranean any day.

Especially when I found this on the mat–another little outing for my penny mats! 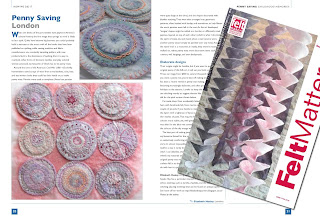