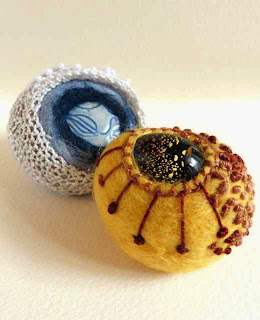 I like mudlarking, and collecting tumbled glass from the beach or bits of broken pottery–especially if it's blue and white. So, I was thinking of something to do with my treasures, rather than leave them in pots on window sills. A-ha! I thought, I know, I'll make them into felted stones! I'll embroider around them just as I did with the penny mats–I bet they'll look great. But they don't, they look creepy and weird. 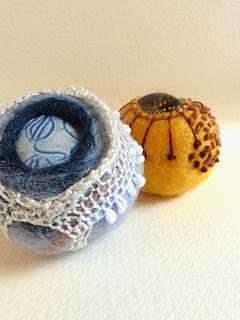 One looks like a recently extracted mess of an eyeball, the other as I imagine Big Bird's might after a night on the sauce–or after a punch up. Much mirth has ensued around here, as we wedge the eyeballs behind our specs and take silly photos, none of which I'm willing to share!


I haven't completely given up on this idea though, and with Halloween not too far away, who knows, maybe I'll make a few orange and black versions to hand out to trick or treaters? Afterwards, I'll take a more sensible approach: make them flatter–less eyeball shaped–with the bits of stone and glass off centre, then maybe they'd work as paperweights. What do you think?