A while back, I promised to share my pattern for making a Wabbity, however I haven't been able to do so until now as the pattern was licensed to Knitting Magazine. The full pattern is quite long, so I'm trying (but failing miserably in the 'how to upload a pdf pattern' bit) to create a Ravelry page just in case you'd like the all singing and dancing version (including clothes). The concept is really pretty simple though, so below is a modified version of the pattern, which will produce a chubby little chap like this one. 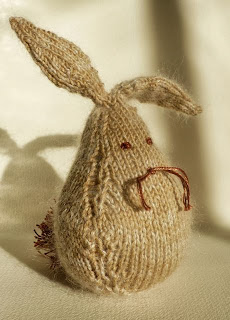 If you want to make a fatter or slimmer version, simply add fewer, or more, knitted rounds between the increase and decrease rounds. 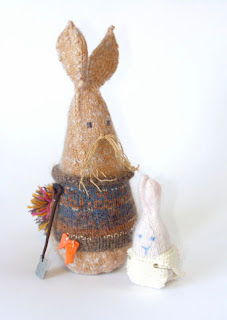 You will need…
A set of 2.5mm dpns
Toy filling
Kidsilk haze, combined with Angora Merino by Regia gives a lovely tweedy effect. Half a ball of each will be plenty for one Wabbity.
Knitter's sewing needle.
Scraps of yarn for the eyes, whiskers and tail

Tip: Keep going in this manner to make a larger Wabbity, or knit fewer increase rounds if you want a smaller Wabbity.

To finish…
Use scraps of yarn or embroidery threads to make the eyes and whiskers. Make a pom pom from scraps and sew it to the body using the initial cast on tail. Give your Wabbity a name and perhaps make him/her a friend–Wabbitys like company!

Feel free to email if anything doesn't make sense, and if you do knit a Wabbity, I'd love to see a picture. Happy knitting!

PS: I'll let you know as soon as the full pattern is available on Ravelry.
Posted by Elizabeth's quarters at 04:27