At the weekend I'll be attending another indigo dyeing workshop. I've done indigo dyeing before, so know the ropes, but feel it isn't really something I can do at home as it's a messy and smelly process that isn't convenient if you have a small, white kitchen. It also doesn't help that when I want to hang the fabrics outside to dry, I either have to carry them through communal areas of our block of flats, or risk dripping indigo all over kilims and curtains to take them out via the sitting room.


However, I love dyeing fabric, and it really pleases me to use something I've actually dyed in a textile. I think it has something to do with not wanting to be reliant on anyone else, or restricted to using only what I can find on a shop shelf. In the past I've tried rust dyeing, which is fine if you like brown. Recently, I've been playing around with fabric bundles and natural dyes imparted from garden plants, vegetables and spices. The results have been mixed, sometimes just haphazard splodges that look more like faded bruises than anything intentional. Sometimes, I've been too heavy handed with the colour and have ended up with Khaki rather than the soft reds I was hoping for. Whatever result I got though, as soon the fabrics were rinsed my efforts mainly disappeared down the plug hole.

So I decided to do things properly and bought some chemicals. Soda ash to scour the linens and remove all impurities from them. Alum mordant to make the colour fast, and some cream of tartar to intensify the colour. At Patrick's insistence I bought a dedicated dye pan–big, but still small enough to fit on the hob–and set aside a wooden spoon for stirring my concoctions. Now, whenever Patrick sees me over the dye pot he gleefully chants 'Double, double, toil and trouble. Fire burn and cauldron bubble'. The joke hasn't worn off–yet. 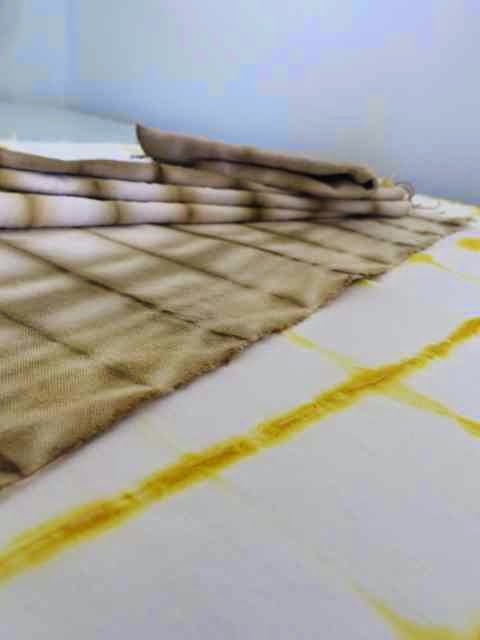 These pieces above were all done with the same shibori technique. First I folded the fabric lengthwise into a fan, then folded the fan into a concertina, and wrapped everything tightly with rubber bands or bulldog clips. The piece below was simply folded into a fan then secured with hair grips. As you can see, too much colour has penetrated the fabric and the pattern is somewhat lost, but perhaps if it was a prettier colour (less brown would be a good start!) that wouldn't be a bad thing. 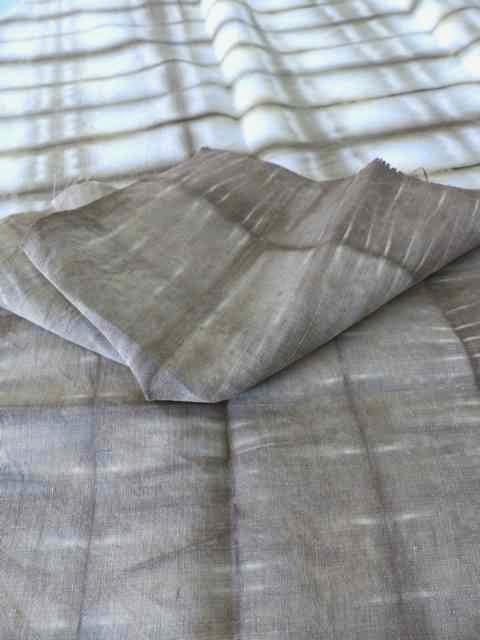 My plan is to overdye some of these pieces with indigo and see what happens! If they work, great, if not, oh well. After that, I'll try some fabric bundles again, because as much as I love shibori, it's always good to try something new.