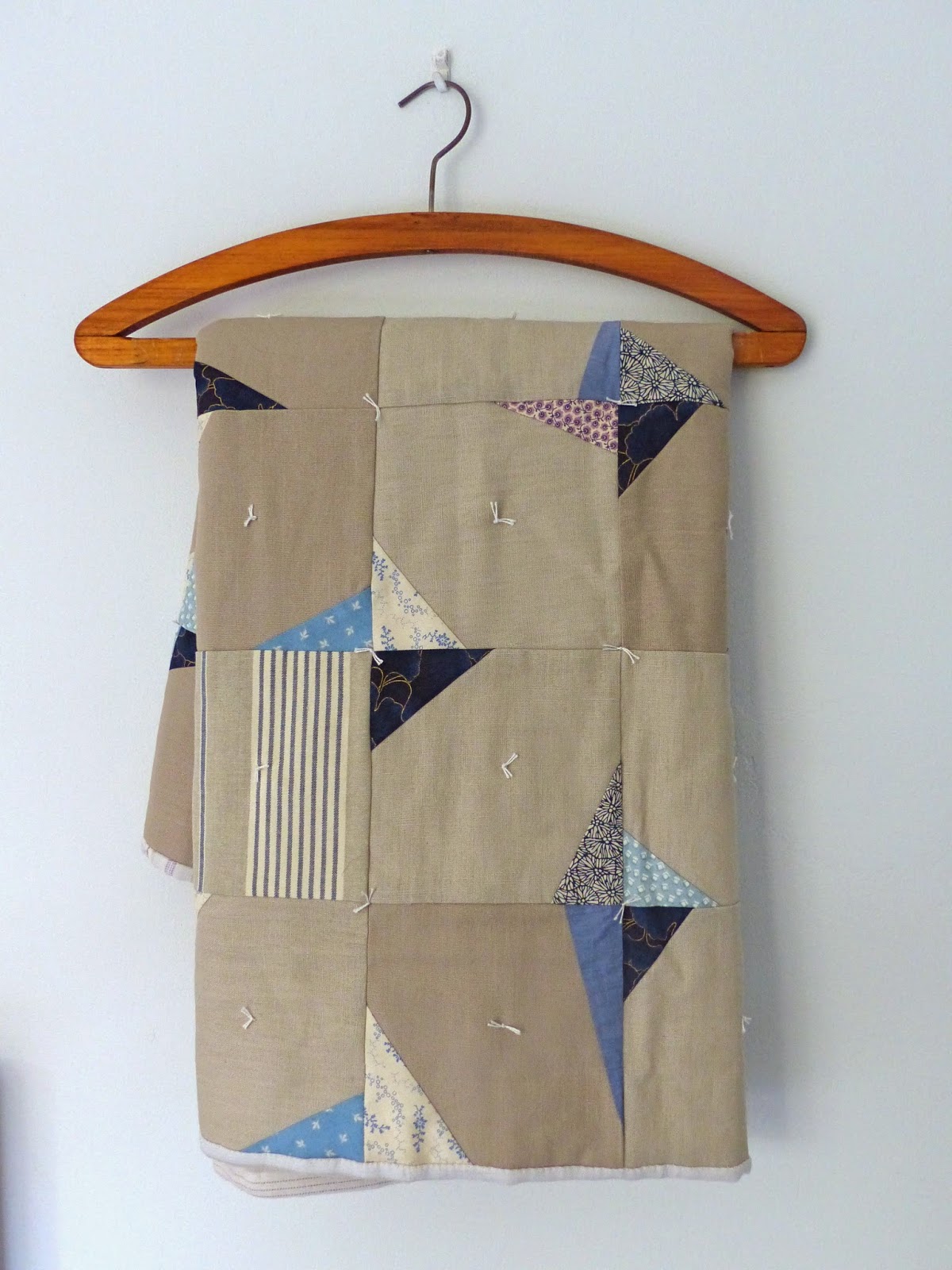 For the last few weeks, I have been drowning in builder's dust and tissues. Firstly, we had a new bathroom installed, which meant knocking back walls, and having old tiles removed with chisels and mallets. All this went on while I worked in a nearby room, every day getting just a little dustier than the one before, until finally, I was a dead ringer for Miss Haversham. I'm sure I ingested most of the dust (saves on conventional cleaning, I guess) as once our team of burly builders left, I came down with a real stinker of a cold!

Now the flat is spick and span (well it was for all of 2 hours) and I can breathe through my nose again, I can smell Autumn in the air. Autumn, is without doubt my favourite season, although I do have a perverse liking for the milky skies and short days of Winter too. I'm definitely not a Summer person–far too sticky! 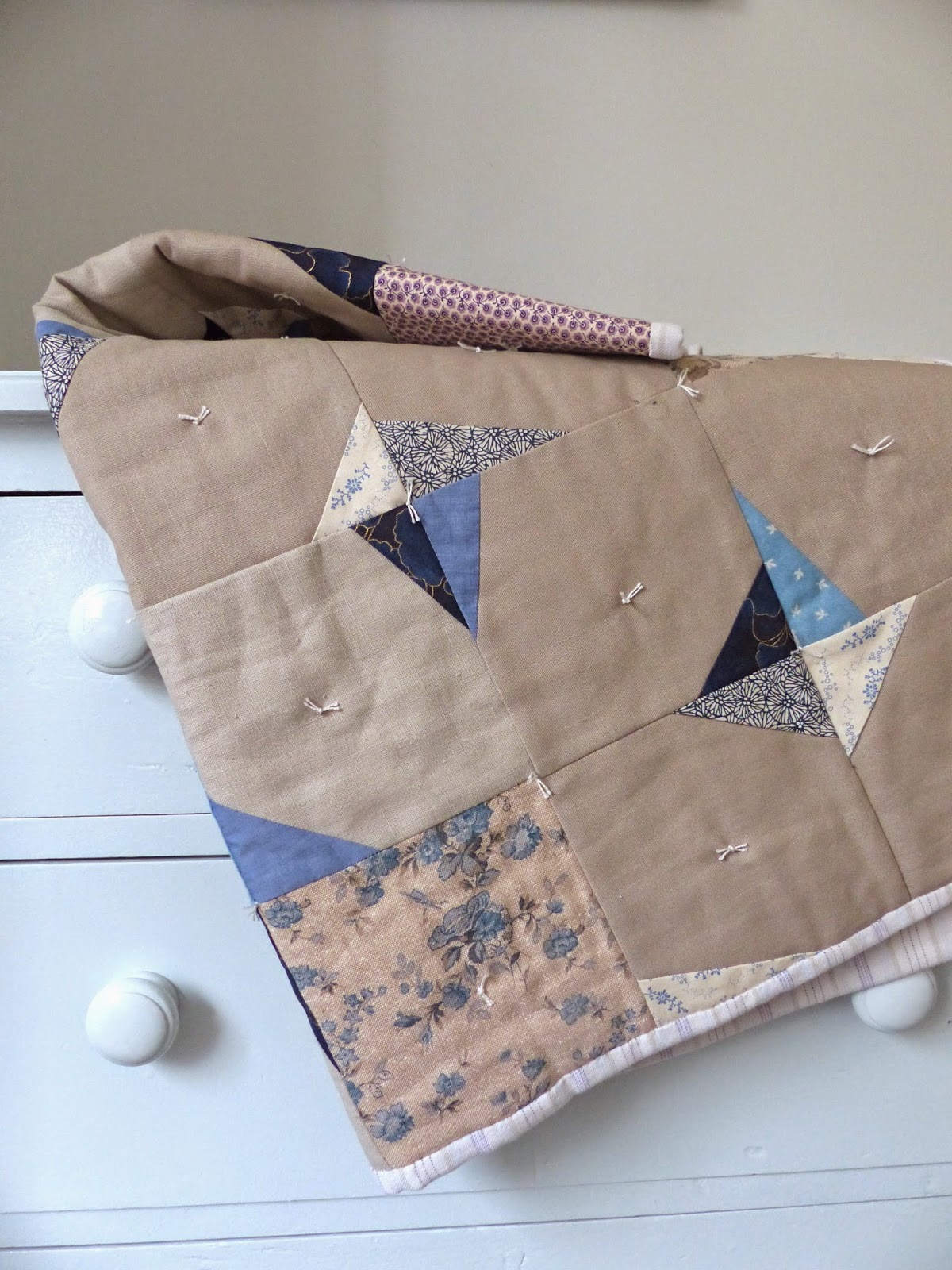 Autumn also brings out the maker in me–be it knitting or sewing–and this little lap quilt, which I made last weekend, is evidence of just that urge to make once the nights start to draw in. Yes, a quilt in a weekend! Quite a contrast to the frilly, frothy white quilt which seems to have no end in sight. 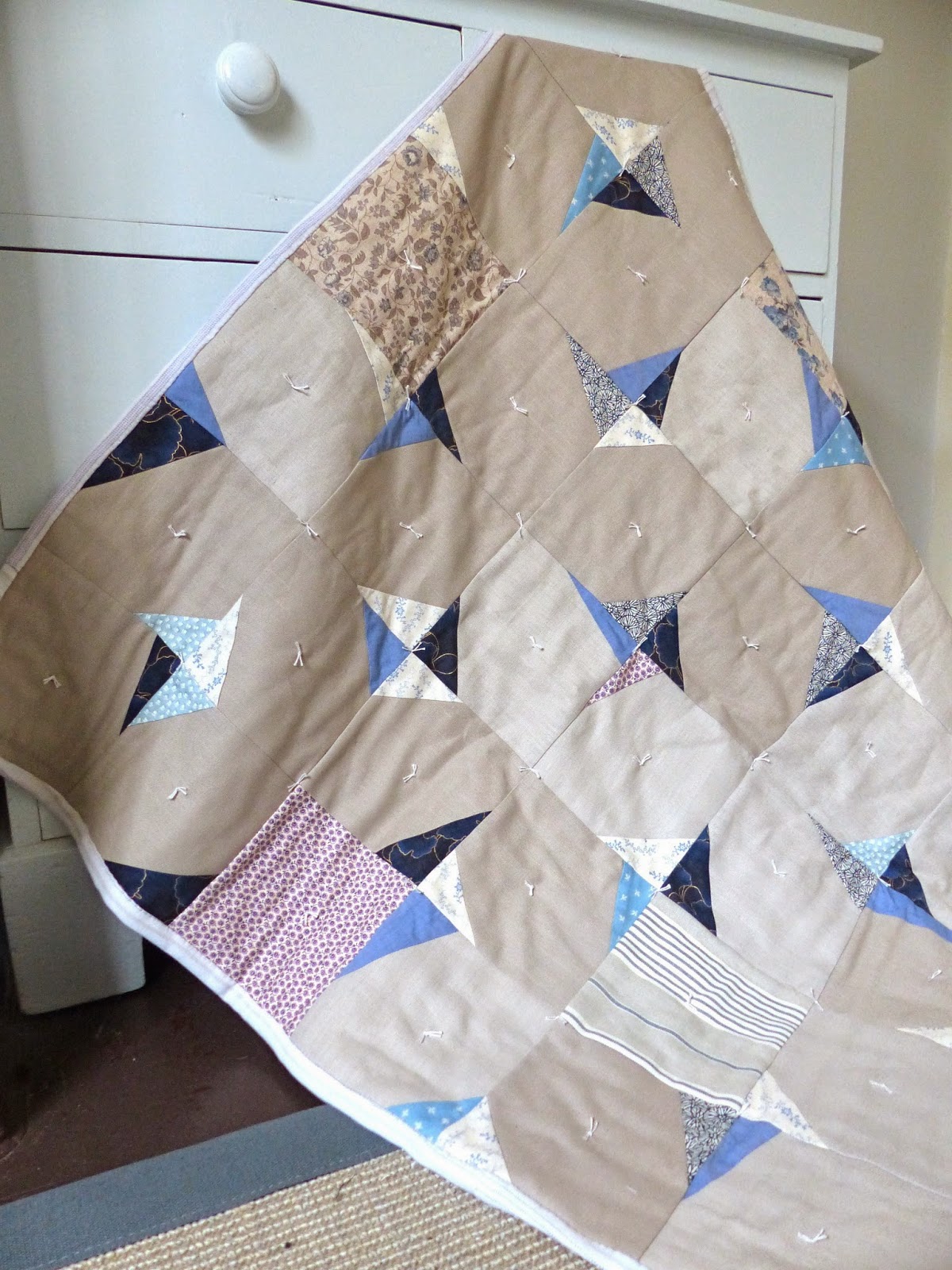 What I like about this quilt, apart from the speediness of it all, is that it gives the impression of wonky 1/4 square triangles, when in fact it's just squares with their corners cut off and replaced with contrasting fabrics. In terms of quilting, I kept it just about as basic as is possible by hand tying it with knots. 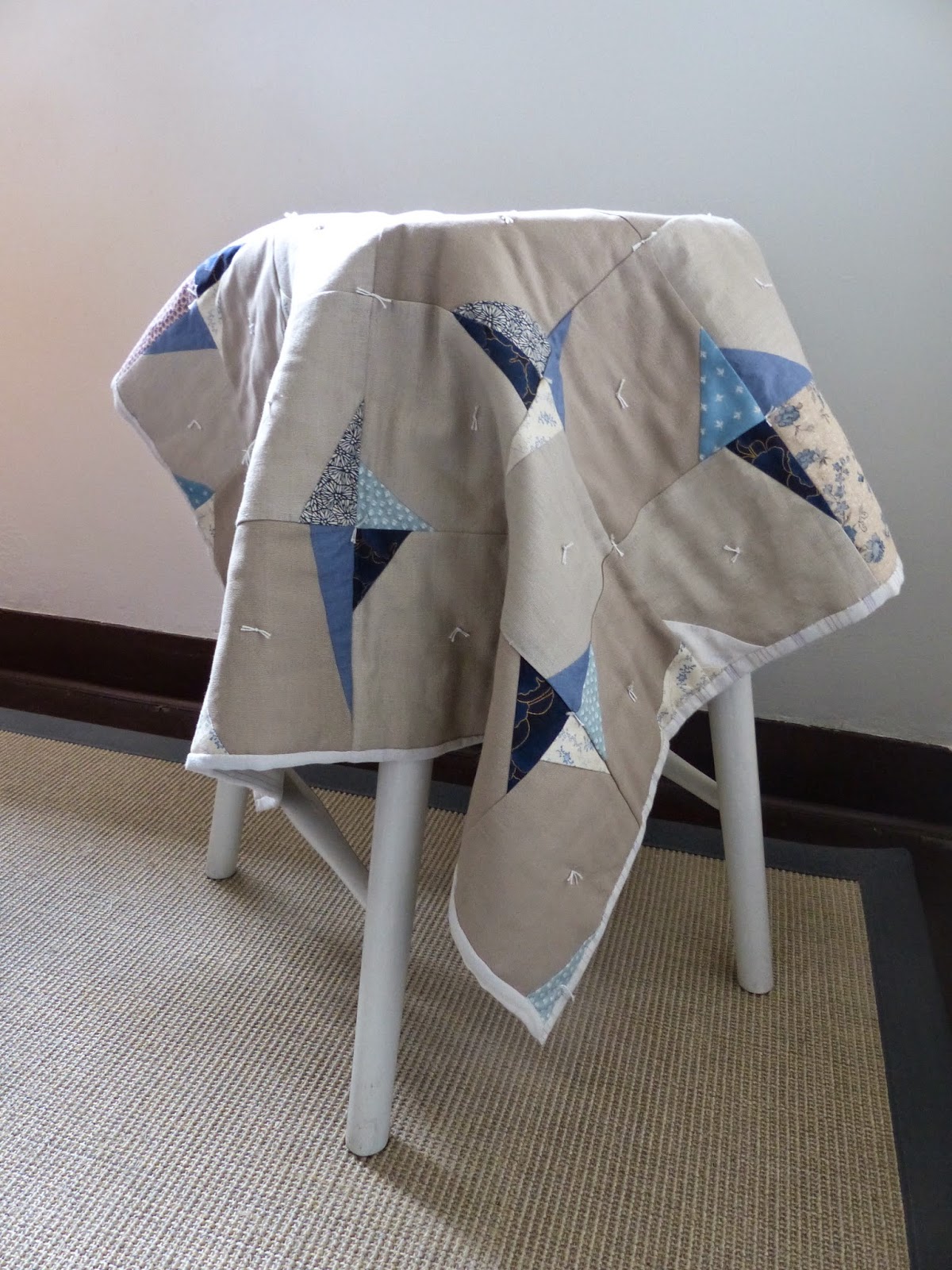 For the binding and backing, I recycled some brushed cotton that was once part of a ridiculously diaphanous nightdress. Despite its softness this nightdress was completely impractical, since every time I wore it, it would wind itself around me as if deliberately try to strangle me. So, as lovely as it may have looked, a murderous nightdress isn't much fun, and another, more benign, incarnation had to be found for it. 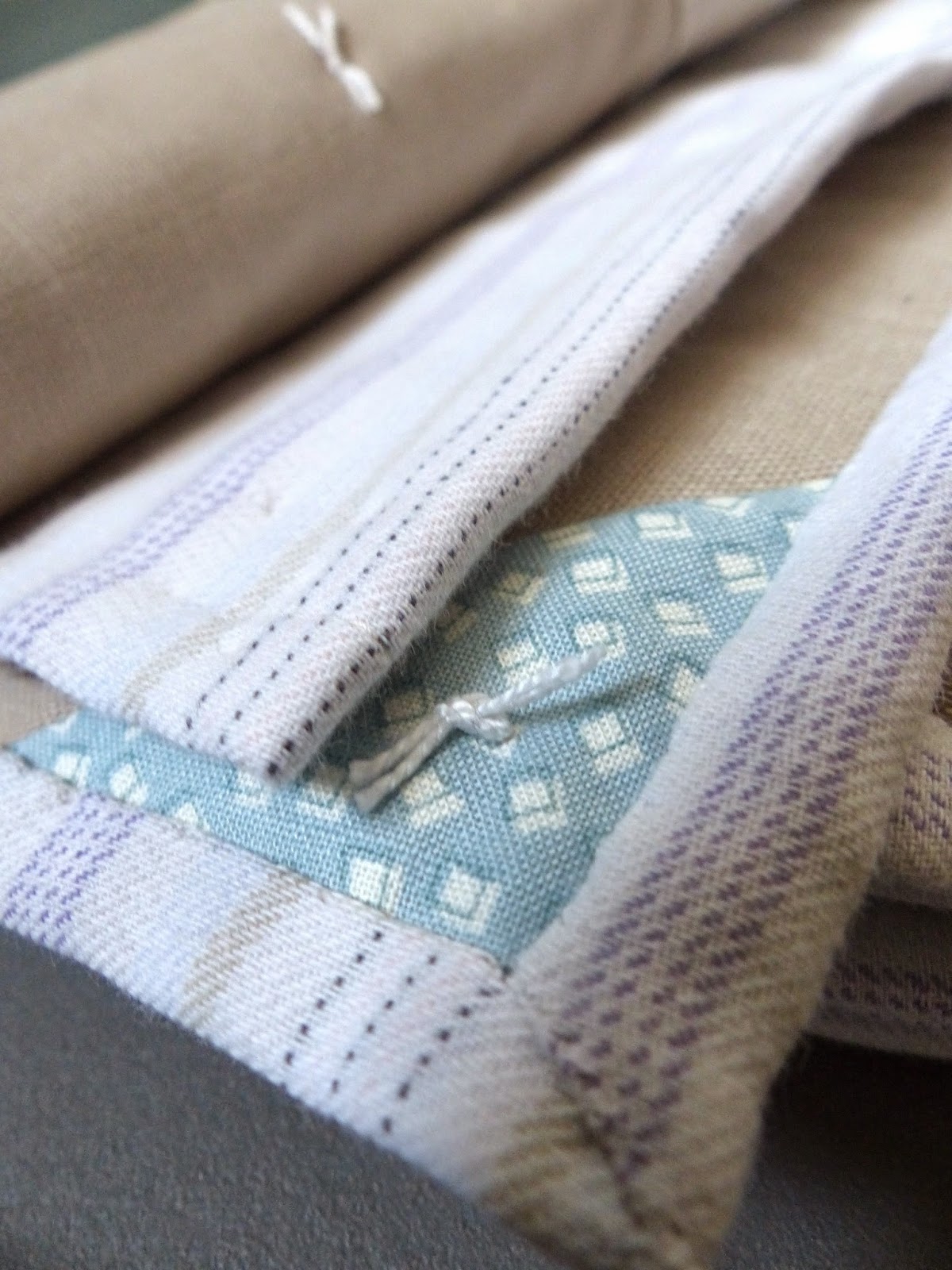 A former quilting teacher told me that it was a tradition in Northern Ireland–particularly around Belfast–for quilters to back their quilts with off-cuts from the local pyjamma factory. This struck a chord with me, as many of my family hail from Belfast. However, I also find it fascinating that fabric can pinpoint the origin of a textile to such a specific place, almost as if it is a kind of fingerprint, or DNA. I've done some further research to see if this is a predominantly Catholic or Protestant tradition, but so far haven't had much luck. I suspect, due to the difficulty Catholics had in getting work (and therefore access to the off-cuts) around Belfast during the troubles, that it may have been a Protestant tradition, but this is merely a hunch. It is something I'd be very interested to know though, so if anyone can enlighten me further, or point me in a direction where I can find out more, please forward me any relevant links, or info.

PS: Isn't blogland wonderful, the way you can pose a question to the entire the world, and be fairly confident you'll get a response?
Posted by Elizabeth's quarters at 05:38