You could be forgiven for thinking that I have abandoned blogging for good, but I haven't. It's just that nearly all of my sewing projects are for publication elsewhere, and quite understandably, publishers don't like it if you divulge their secrets before they've had a chance to publish them first. 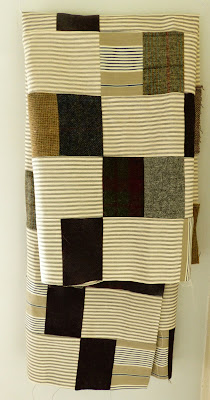 However, I have managed to squeeze in some time to make a start on this new bedspread. It's going to be a toasty warm and heavy double bed sized affair–a perfect thing to work on during the sticky Summer months! Pleasingly, the top is made entirely from stash; a mixture of heavy cotton ticking and various tweeds that I've amassed over the years. Even more pleasing is that all of these fabrics come from British mills. So not only does that save on air miles, but it also feels good to support British industries-both large and small. 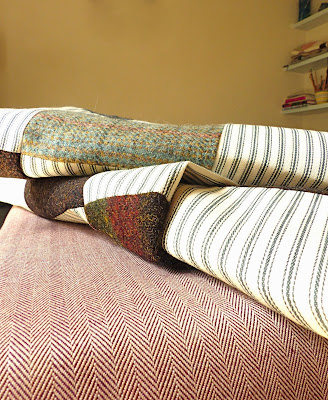 The backing fabric, which doesn't come from stash, is produced by an English mill–a beautifully soft pure wool, suit-weight herringbone. Something about it reminds me of the sort of loud and flashy suit a 1970s sales rep, or advertising man, might wear but for a quilt backing I think it is just the thing and not too garish at all. 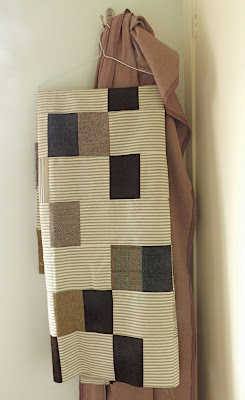 When finished, this will be quite a mannish bedspread; non-fussy and made from fabrics often used in men's tailoring, so the quilting will need to be equally straight forward. I can't decide between super big stitches or knots, or perhaps I might use tweed covered buttons to help keep the layers together. If I go down the thread route, it will have to be super sturdy–something like a linen and not my usual choice of cotton perlé.

Here's hoping it won't be another 3 months before my next post!