As much as I like cutting up fabric and sewing it together to make something new, the potential to actually create fabric appeals to me even more. I think it has something to do with control and not being limited to using fabrics designed by someone else. I'm not claiming that I could do a better job than another designer, but somehow, when I use someone else's designs, projects just feel less personal. 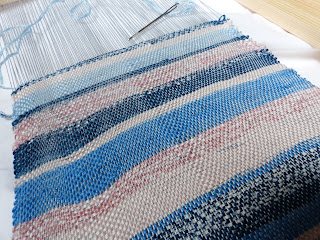 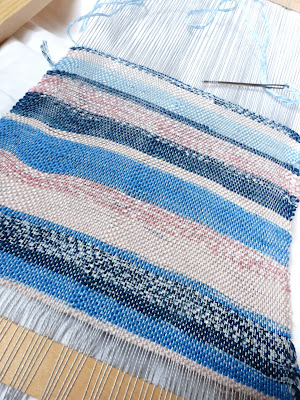 I suppose that's why I prefer woven fabrics (and enjoy knitting) to screen printed fabrics, as print, seems to me, to scream out somebody else's taste and style, while woven fabric is more about the intrinsic quality of the cloth. Nope, I'm definitely not a fan of screen printing: it was my least favourite compulsory unit when I first did an art foundation course–way back in the mists of time. And, as recently as last year, I withdrew from a course that changed its syllabus half way through from a smattering of screen printing and lots of natural dyeing, to no natural dyeing and only screen printing (I was pretty miffed, to say the least!).

So it's really quite surprising that it's taken me so long to get around to trying my hand at weaving. Okay, I've had a little go at needle weaving–or darning, but nothing more ambitious than that. I've long been a fan of the work produced by Mourne Textiles the marriage of Norwegian and Irish culture and style seems so right! I also follow a few bloggers who weave, although I'm not so keen on bold and chunky weaving–the sort that usually hangs from sticks and includes great clumps of rovings. 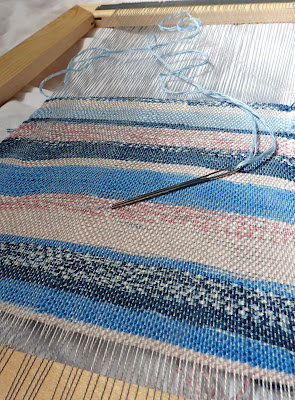 I hope one day to produce something that might actually be wearable, but I've a long way to go before then. As you can see, my first attempt is full of unintentional waves and wobbles, and I've made the classic mistake of pulling the weft threads too tightly so the over all piece has developed a 'waist'. (I've since learnt to leave little loops at the end of each row to remedy this). As I'm only a beginner, a simple frame loom is enough for now, but in time, a heddle loom would be nice–as long as I have the space to house it. Until then, a frame, a comb (to tamp down the threads) and my super chunky darning needle will have to do. By the way, does anyone know the correct name for this type of needle? It's massive, blunt ended, with an enormous eye, and is my absolute desert island sewing tool.