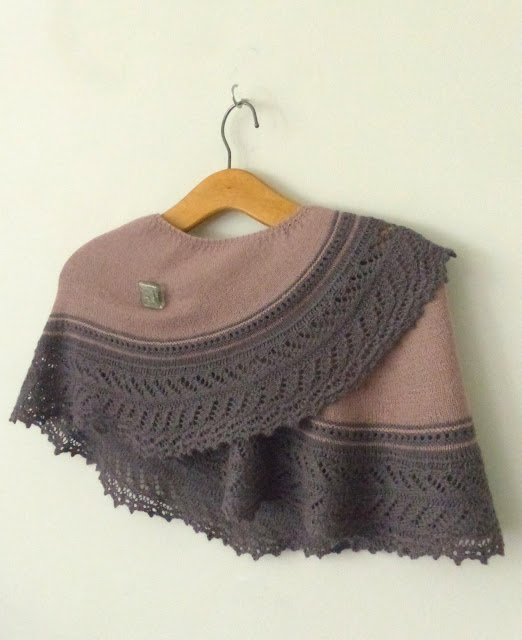 At last, I have something to show that I've made!

Knitting is something I do to relax, something I can do while watching TV, so the things I knit tend to be plain. Generally stocking stitch or rib, with very little shaping, that way I'm less likely to make mistakes. This also reflects how I like to dress, nothing too fussy, with neutral colours. It's not that I can't knit more complex patterns, I can, but I'm also terminally lazy, and as I said, knitting is something I do to keep my fingers busy while watching telly. Lately however, I've grown bored of endless inches of stocking stitch, so decided to try something new, hence the above shawl. The pattern is Paris by night which I chose partly for its wonderful name (who could resist?), but also because the lace border presented enough of a challenge to keep me entertained, but not so much that it might make my head hurt. 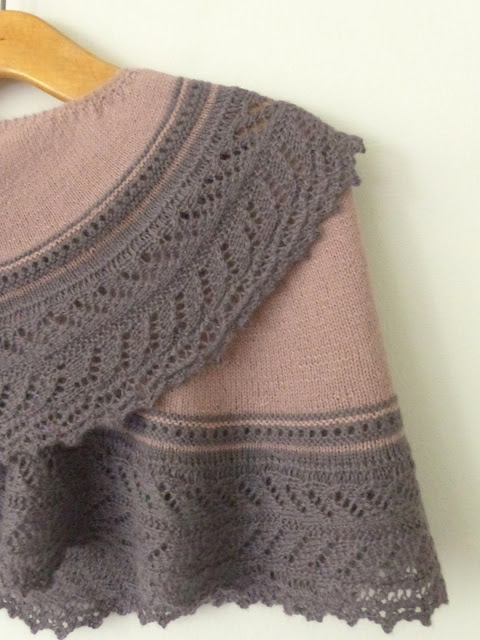 I had intended for the colour to be the opposite way round, darker stocking stitch with a lighter border, but my local knitting shop only had a limited supply of yarn in stock. I'm an impatient sort, and couldn't wait for them to order more in, so I bought what they had and switched my colour order. The yarn has the most beautiful drape, it's part silk, part wool and part linen, and is the slinkiest, most luxurious feeling thing to wear around my shoulders. Indeed it will be the perfect thing to wear on a romantic evening stroll along the Champs Elysees should Patrick and I ever get round to arranging the trip to Paris we've been promising ourselves for the last few years.

The border was fairly simple, although as there is a little bit of lace work on the reverse of the knitting it does make any ripping back more difficult. At first, I wasn't too impressed with the finished shawl, it just looked a bit lumpy, and the pattern not very distinctive, but a good blocking transformed  and really bought the lace border to life. 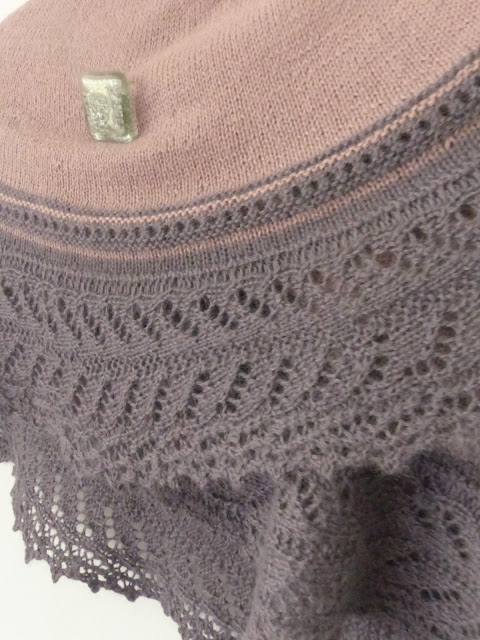 Now that I've broken out of my knitting rut and had a go at a lace pattern, I quite fancy tackling some colour work. A Fair isle tam perhaps? Colour and pattern—that really would be pushing it!

————————————————————————————————————————
The Lacemaker is a rather depressing French film starring Isabelle Huppert that my stepmother (a French & Latin teacher) took me to see when I was a teenager. I didn't dislike the film but being a basically uncomplicated and cheerful soul I couldn't empathise with the main character's enigmatic demeanour and retreat from the world (I found her a bit wet). I did however like the title, so pinched it for this post.