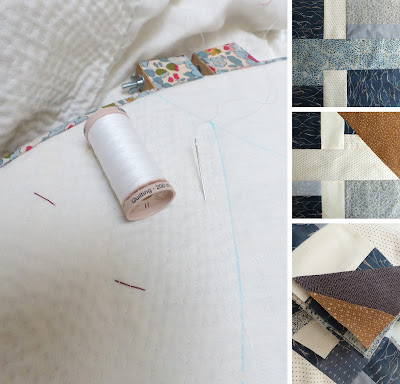 There has been progress on my blue and white quilt, I've put the sandwich together and have started hand quilting. This will take forever, as it's the sort of task that only gets done when a) there's no other sewing to do, and b) when it's cool enough for me to sit under a mound of padded fabric without melting. So far, I've managed 11/2 square foot of quilting, which is about a tenth of what still needs to be done. I'm aiming to get it finished by Christmas but I'm not saying which one.

For my motif, I've chosen an abstract acorn pattern as the house is not only surrounded by oak trees, but the estate is named after them. Shortly after we moved here, all the acorns fell to the ground (not in protest at our arrival) which made walking treacherous and had a huge effect on my choice of footwear, clogs off, sturdy boots on. I wanted to suggest a similar look to a floor covered with acorns, and, rather conveniently, my quilting hoop proved to be the perfect template for an oversized acorn pattern—how's that for luck*.

When I first took up patchwork, I had a go at free motion quilting but didn't get on with it, I like the look of it but not the doing it. Likewise, it would be churlish of me to pretend that I don't admire exquisite machine quilting (the sort that reminds me of patterns on custard cream biscuits) because I do.  Again, I just can't do it. I would have to spend so much time practicing to reach any kind of level of competency that I'd be happy with this would leave no time for anything else. So a hand quilter I shall remain!

Which brings me to the title of this post. I have sewn for a very long time and yet I know diddly squat about needles and thread. I am not a tech head and couldn't care less about the type of steel my needles are made from or the carding process for thread.** I fail on so many technical levels and am driven mainly by aesthetics, sometimes they coincide but usually it's by accident rather than design.

So, when I realised that thread can be loosened from a reel of cotton (like the one in the photo) simply by twisting its head, it was as if I had discovered penicillin—this is technical stuff don't you know! The second thing I learnt is what a huge difference quilting cotton makes. Out of habit I use it, but I've never really questioned why, I just blindly use it because I was told to. Yet the other day I sewed with what I thought was quilting cotton but the end result wasn't the one I was used to—no lovely puckers where the sandwich is pulled together. When I turned the spool round to read the label I realised this was ordinary sewing thread, not quilting cotton. The realisation that there really was an actual difference astounded my Whinnie the Pooh like brain.

What can I say, I'm a slow learner. What some quilters learn on day one of quilting has taken me many years to absorb. But it has made me think: maybe I should try experimenting with different needles for a comparison of their technical attributes instead of just choosing the one I can shove the thread through. Maybe there is a corner of me that is hungry for technical knowledge after all. Maybe?

* I swear it was this way round: idea first, followed by a stroke of luck that the hoop was the ideal tool to realise it, and not, what can I do with the hoop as I'm too lazy to work out another pattern!

** However, I did see this great video on youtube.
Posted by Elizabeth's quarters at 04:52