I'm the kind of person who normally wouldn't dream of asking a stranger where they got a shirt/bag/pair of shoes. Something inside me thinks it's just plain rude. But I was sitting behind a woman on a bus a few months ago who was wearing the most amazing coat—Joseph's very own would have paled into insignificance beside it.

I tried to sketch the coat in my notebook, however, my solitary black marker couldn't capture its beautiful embroidery and colours, so eventually I plucked up the courage and nervously asked where it was from. The woman wasn't the friendliest of sorts (this is another reason I don't ask strangers where they shop—fear of refusal or general snarkiness) but she brusquely informed me she'd bought it from the V&A museum shop. This told me, as if I didn't already know by the woman's tone, that I couldn't afford it, besides, as I later found out, it was no longer for sale. 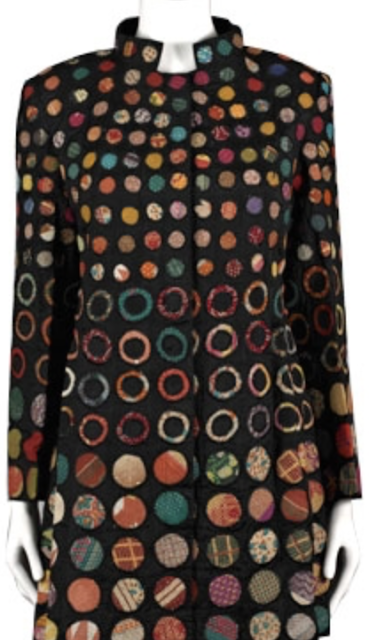 I managed to track down an image of the coat, but it really doesn't do it justice. Each circle appliqué is a different fabric, and the blanket stitching holding them in place is a rich multitude of coloured threads. The over all effect is one that carefully tows the line of looking both rustic and expert at the same time—something I absolute love and aspire to emulate. The increase of size in the circles as you scan down the coat creates the illusion of flare, when in fact, it is quite a fitted garment—so you get the impression of swishiness without the bulk. 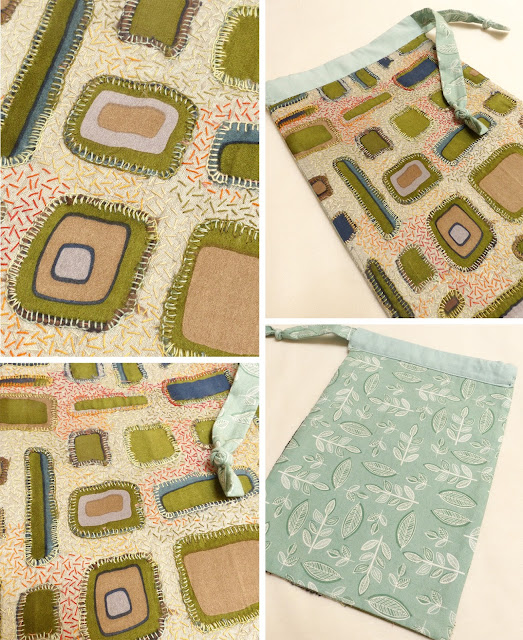 I briefly thought about making a similar coat for myself but as I limit clothes making to basics I don't think my seamstress skills would have been up to the job—not to do it justice anyway. Maybe one day I'll make a simple skirt that incorporates some similar embroidery around its hem, but for now I've made do with a project bag. I cut out scraps of patterned silk that I had in my stash and sewed them to a raw silk background with blanket stitch. I used lots of layers of blanket stitch, a) for a homespun look, and b) to stop the edges from fraying. Then I added seed stitch between the appliqués. As you can see, the bag itself  is a simple drawstring affair with printed cotton on its reverse side.


It may not be a technicolour dreamcoat but I am quite fond of my new work bag, it is also extremely useful as it holds more than my dumpling bag which is sadly falling apart.

Patrick doesn't always comment on my sewing, but he said this reminds him of William Scott paintings. Perhaps he's right, we spend a fair bit of time in Hastings and usually visit the Jerwood Gallery when there. Scott's paintings are among the Jerwood's collection and they held a major retrospective of his work a few years ago, which featured many of his pots and pans canvases. 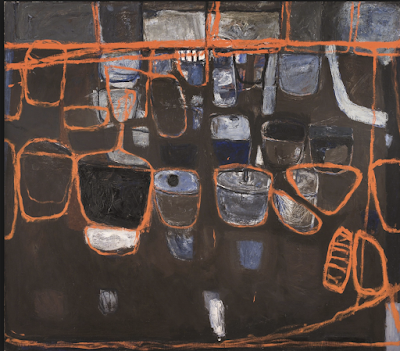 So be it pots, pans, or a fabulous coat, inspiration can be found anywhere.

Where do you stand on asking strangers where they shop?