This definitely appeals to the destructive side of me: the side that likes to pick at candlewick bedspreads, pop bubble wrap and peel labels off packaging! Is it any wonder that one of my favourite games as a child was Kerplunk? For those unfamiliar with this marvelous toy, it is essentially a clear plastic column, the top half of which is crammed with marbles, supported by a lattice of straws. The aim is to carefully remove the straws without sending the marbles, crashing, or kerplunking, through the gaps to the bottom chamber. 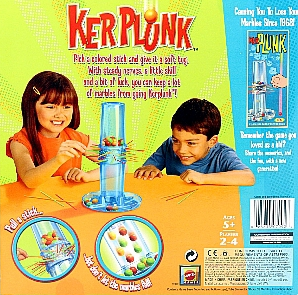 but enough of this trip down memory lane, it is time to 'put away childish things' and turn to the more ladylike pursuit of embroidery–albeit a rather grungy type of stitchery.

I've long been a fan of drawn thread work as I like to see how far fabric can be pushed to the limit while still holding together. I used to associate drawn thread work with crisp white linen, pierced with a series of holes, all held beautifully in place with stitching so delicate it was probably done by elves with tiny little fingers. However, I recently attended a short embroidery course, where I was fully expecting to be taught how to sew 'properly'. (I thought the discipline of having to produce rows of perfect herringbone stitch would do me good, since I naturally tend to go off-piste, and do my own thing). The tutor had other ideas though, and after showing us the basics, fully encouraged us to experiment and break the rules. I was delighted.

So, after the first day, where we learnt the basic stitches, I decided to pull apart some of the hand-dyed fabric I had prepared the previous day. I had great fun tweezing out warp and weft threads, then strengthening the areas I'd made weak by stitching over them.

Below are the results, the blue one is the one I made on the course, the other is something I've been working on at home. Since I've had more time to spend on the latter it is more elaborate than the blue version which only suggests the direction I was heading towards. The fabric on the second piece is also a coarser weave than the first so it's more obvious where threads have been removed. I've layered a few organza strips and netting behind and over the top of the base fabric to give it some depth and finally hidden a few leaf skeletons amongst the layers, as they echo the fragile framework of the drawn threads. I guess, like me, nature also likes to pull things apart and put them back together again. 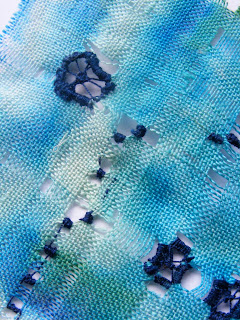 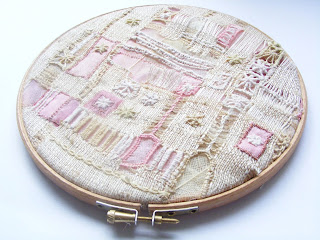 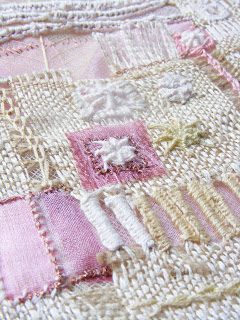 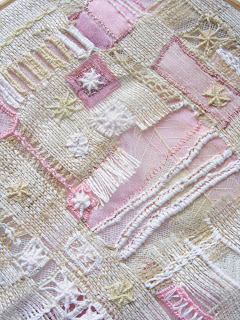 Email ThisBlogThis!Share to TwitterShare to FacebookShare to Pinterest
Labels: Quilting and stitching