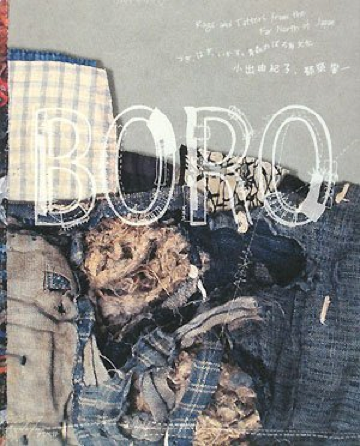 Top of my Christmas reading wishlist was this little volume. I thought it would be a good follow up to Indigo, and on the whole, I think it's a decent book, a far better one than some of the reviews had led me to expect. However, if it really was as expensive as some of the listings on Amazon suggest (I'm far too polite to ask how much my presents cost the giver!) then it is ridiculously overpriced.

Essentially, it is a 128pp monograph that celebrates the collection of Chuzaburo Tanaka. Tanaka recognised the importance of utilitarian textiles as historically significant cultural items, and began collecting boro items form Northern Japan back in his early 20s–he is now in his late 70s. It is probably not too great an exaggeration to say, that Tanaka is almost solely responsible for bringing boro textiles to the world's attention, as then, he was virtually alone in appreciating their worth, and taking the time and bother to collect, preserve, and catalogue them.

The book itself is quite small, and there isn't a lot of text–a handful of short essays, with the rest of the text comprising captions–so it is rather a light book. What little text there is however, is informative, and the pictures are excellent, and include really good detail shots. The design and layout are beautiful and I really like the smaller format. The paperback cover is printed on pleasingly textured, recycled board, and comes with an additional paper wrapper, which cleverly suggests the layering element of boro.

Although I'm delighted to have it in my collection, and would recommend Boro to others, I would have liked it to be more substantial than what is really only an attractive picture book. Perhaps it's because I'm bordering on boro-obsessive that I think the subject warrants the kind of treatment Jenny Balfour-Paul gave her book, but I really would like to learn more. Some web searches have revealed another book on the subject by David Sorgato and Nuzio Crisa, which gets favourable reviews. However, at a scant 96 pages in length and costing upwards of £70, it would have to be Pulitzer prize winning brilliant for me to purchase it. However, if anyone has read it (or other books on the subject) and thinks it's worth the money, please let me know!