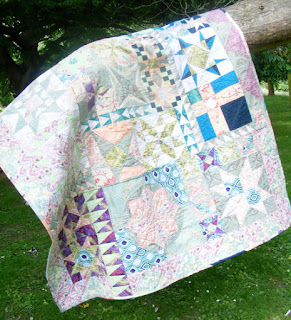 Well, here it is, my star quilt. Nearly nine months making and rather a labour (excuse the pun) of love. I enjoyed almost every minute of making the quilt, although I have to confess, occasionally felt it might get the better of me.

The design isn't mine, my quilting tutor has to take credit for that. Although as the rebel in me finds slavishly following other people's patterns and recipes a form of cruel torture, I inevitably strayed from the brief and did my own thing (tut tut!). Most of the time however I was well behaved and managed to stick to my tutor's plan of making a quilt from different sized 'star' blocks, borders and joining strips, some using foundation piecing, some English paper piecing, others fast piecing techniques. As if that combination wasn't challenging enough, my tutor added a few other techniques to the mix such as curved seems and on point piecing. To top it all, the quilt was made in six sections, only four of which we ever saw finished examples of (that required a leap of faith and much well-placed trust in our tutor).

I'd always intended to use blues, greens, lilacs and dusty pinks—just not quite so many of them so the finished quilt is much livelier than I thought it might be. Normally, I prefer neutral colours, and less of them, but when a beautiful fat quarter is just a mouse click away I find it impossible to resist that temptation to buy. 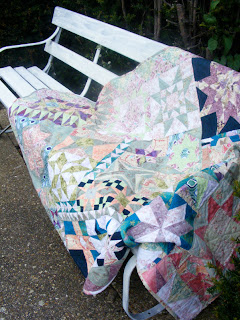 Because one section could be quilted while another was still being patchworked, this left less to do at the end of the project. I chose to hand quilt mine, partly because I love the look of hand quilting, but also because I hate wrestling with acres of quilt sandwich as I try to roll them, fold them, twist them and generally force their unwieldiness through my domestic sewing machine. I'm told the hand quilting feels lovely too, but since I've lost all sensation in my fingertips (months of hand quilting has taken its toll), I can't tell and will just have to take Patrick's word for that. Yes, despite a preference for handiwork, my next quilt will most definitely be machine quilted! 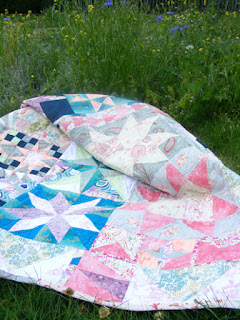 PS: I'll do a separate post on quilt assembly tips as including them here would make this one too lengthy. It also gives me an excuse to show off more star quilt pics!

Posted by Elizabeth's quarters at 09:41

Email ThisBlogThis!Share to TwitterShare to FacebookShare to Pinterest
Labels: Patchwork, Quilting and stitching