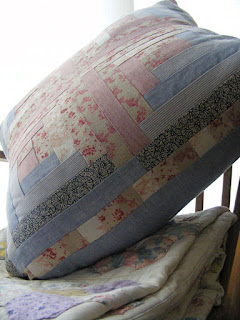 January's was on the baggy side, so I made February's a tad tighter. So what if it now looks as if the cushion is straining to bust the cover's seams at the middle–I think the use of recycled linens, and fabrics cut on the bias will help it stretch over time. At the moment, however, my Log Cabin cover is so taut, no imprint is left when I lean against my cushion. I wish I could say this is because of my airy, sylph-like physique, alas no, like my cushion, I too have a tendency to strain at the seams!

Both my January and February cushions were based on traditional blocks, but I'd like to do something  different for the next, which means it won't be finished by the end of March. I've been doing some Indigo dyeing recently, and think this combined with Kantha stitching could be interesting. I suspect it will turn into something of a longer term project, but then again, it's always good to have something to get your teeth into, even if that means failing in my New Year's resolution to produce a cushion a month!

How are you keeping up with your New Year's resolutions?